Columbus swept their 2-game home stand, looking like a team focused on a deep playoff run. They will now travel to New England in a match-up of the two hottest teams in the Eastern Conference.

Current Playoff Outlook: A Road Win Away From Playoffs

Another good week of results starts of course with the Crew's home win over the last-place-but-still-not-Chivas-bad Montreal Impact.  I'll take the 3 points, but I didn't like seeing the end of game sloppiness that resulted in a missed 3-0 scoreline and nearly a 2-1 final.  Goal Differential looms large, as it's the second tiebreaker behind Wins.  Keep that in mind as you look at the standings in October.

Re-thinking the Revs Win:  It was a Good Thing

At first, I didn't think New England's win over Kansas City was really what Crew fans would have wanted.  About 2 months ago, I had said KC was far enough in front of the pack that they were already "in".  They've since gone 2-6, with their only win in the last 6 being against hapless Chivas TBD.  They're now only 2 points ahead of the Crew and face East-leading DC Friday night.  A loss in DC would make for a very shaky final 3 games for Peter Vermes and his rage (they face, Chicago, Philly and New York).  So the question to ask yourself is, "Self, would you like to see Toronto make the playoffs instead of SKC?"  If so, root accordingly.  It could absolutely happen.  While I still think they'll make the playoffs, SKC is demoted this week to "battling" status.  Personally, I hope they crash out and don't even make the post-season.  A Toronto-Columbus knockout Wild Card game at Crew Stadium would be pretty amazing, and isn't out of the realm of possibility.  4th time's a charm, right?

DC's 1-0 win over the Union meant that the Crew gained 3 points.  This was helpful, but was tempered by Toronto's win against Portland.  TFC still has a game in hand on Columbus, which if they win allows them to jump the Crew in the standings on a tiebreaker.  I had New York losing in LA, so while that loss was great it doesn't change my 4cast.

Overall, I was 4-2.  I missed the Revs win over the Sporks and thought Philly would be able to tie DC.  Happily wrong in both cases. 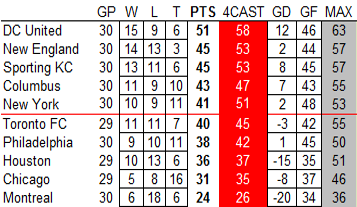 Looking ahead, I think a win in either New England or New York coupled with a final win at home vs. struggling Philadelphia would lock up Columbus' playoff berth.  However, a more likely scenario would be that the Crew get a point out of one of those two games and either 1 or 3 in Philly.  That would still be fantastic, giving Columbus a bit of breathing room going into their final home game.  With 4 points from their 3 game road swing, they would likely need just a tie at home against the Union to secure the playoffs, if that hadn't already been accomplished.

To be clear, no one wants to play Columbus right now - home or away.  Having won 5 of 7, the Crew are back to playing their own brand of possession-based soccer, but now are doing so with a stronger confidence and purpose.  Tony Tchani, Ethan Finlay, Eric Gehrig, Justin Meram and Bernardo Anor are all having their best seasons with the club.  Along with Wil Trapp, Pipa and Steve Clark, they have formed a new core; a New Crew, if you wil (and I wil) that is a joy to watch and difficult to beat.  But New England and New York are also playing well, and I'm not sure that Columbus takes 6 from making those two trips.  Should Columbus win either against New York or the Revs, they would be well-positioned to fight for the 2nd-4th playoff slots.  While DC is likely going to win the East handily, the rest of the spots will be closely slotted.

To spell it out, here's how I see the Crew doing week-by-week from here on out:

21 non-Crew games still matter for the Crew in the East.  4 of them are next Thursday (?!), Friday and Saturday.  Just like last week, there's very little overlap so you should be able to watch nearly every minute of the action (assuming of course that you're not blacked out by either Jim Beam or Time Warner Cable).