While a second straight 3-goal victory at home, the Crew took 6 of 9 points from a critical home stand. Still, the past week saw them merely keep pace with much of the Eastern Conference. Next week's games could provide more opportunity to gain points on their rivals.

In the 70s, Elvis' personal and professional ethos was summarized thusly: Taking Care of Business.  "TCB" and a corresponding "...in a flash" lightning logo was everywhere - his jewerly, his plane, a room in Graceland: 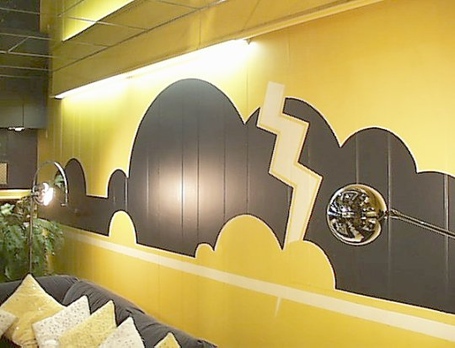 He even named his band The TCB Band (they still perform live gigs under this name).

This week, the Crew did that - and only that - in its playoff hunt.  As I had suspected in last week's "What if..." section, the latest round of games around the Eastern Conference didn't help the Crew too much.  They gained two points on TFC, but New York, New England and Philly all held serve at home with wins.  These four teams (East Quad?  Need a nickname here, folks) are set up to duke it out over two playoff spots for the next two months in what should be a thrilling race.

Houston and Chicago, however, did not keep pace and are both going to need to win about 4 games in a row to get back in contention in the East.  With the Dynamo flying west to SKC and Chicago hosting red-hot Dallas, next week could doom both of their remaining seasons.  Here's a looksy at the current standings, sorted as always by PPG: 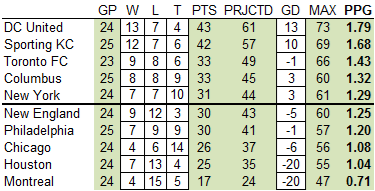 Note: Some values are not visible (Looking at you, Montreal's point total).

Reason to like/trust the blue dots: They take number of games played into account.  For example, while the Crew and TFC are "even" in the standings, Toronto has two games in hand.  My blue dots show that by expecting TFC to get a few points out of those two games in hand.

Reason to roll your eyes at the blue dots: They don't take into account new players recently added or dropped from teams, who's hot, strength of schedule, etc.  You know, human stuff.

The Not-Quite-Heidi Klum "In" or "Out" Analysis: