With a game that will be remembered by many for a long time, the Crew destroyed the Galaxy 4-1 on Saturday. Can they continue to play well as the MLS season hits its 3rd turn?

That win was big time.  Those are the types of games that are remembered as season highlights for years to come.  If it felt historic, that's because it was.  As Matt Bernhardt (@bernhardtsoccer) pointed out Saturday night, the Crew's 4-1 destruction of Los Angeles represented only the 3rd time in team history that Columbus scored 4 or more goals in front of 20,000 or more people.  The first was the Crew's first ever game (!), and the most recent was on 9/1/2001.

The win also significantly buoyed the Crew's playoff hopes.  With 70% of the season and hopefully an extended mid-season malaise behind them, Columbus now sits in 4th place in the MLS East.  Here's the current view, sorted by PPG: 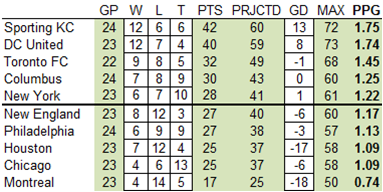 Remember, the blue squares show where each team is projecting to finish in terms of points, based on their record so far.  Something it doesn't take into account, for instance, is schedule strength.

Who or What Do I Root For This Week?

I told you Montreal was due!  Last week was another tremendous week in terms of the help that the Crew got from the rest of the league.  This coming week's book of games probably won't be as kind, with games lining up in a much less favorable way for Columbus (more on that below).

Also, as CONCACAF Champions League play begins this week, Sporting KC, DC United, New York and Montreal will start to feel the compounded weight of the MLS late season grind plus mid-week games and travel.  The problem with that is that of those four teams, only the Red Bulls are in the thick of the playoff race.  On the contrary, the Crew would be better off if SKC, DC and Montreal were focusing their efforts on upcoming MLS opponents, not divvying up playing time and traveling mid-week to far off lands.

Your new favorite bands this week:

Less critical:
What if...

Per a great suggestion, I changed the poll to be a ranking instead of a multiple choice