With a loss to Toronto on Saturday, the Crew missed a chance to establish itself as a team on the rise in the East. Instead, Columbus seems to be destined for a royal rumble with New York, New England and Philly for the last two playoff spots.

Current Playoff Outlook: Stuck In The Middle With Doop

So we didn't get Mix.  Or Jozy.  Or Miroslav Klose.  Or a unicorn.  We did, however, get a very young player with a name that describes lettuce.  Lettuce.  Iceberg.  Iceman.  Aron Johannson.  Didn't get him, either.

The Union got much better by bringing "He looks like a" Carlos Valdes back.  Chicago could still sign JJ.  New York is already stacked and Titi is not about to go out quietly.  The New England Dance Dance Revolution is an enigma; plenty of talent on the team, though. 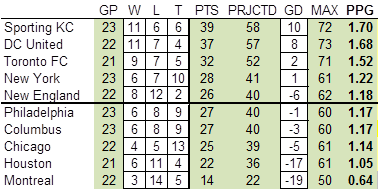 As you can see here, Kansas City, DC and Toronto are currently off the Mapp. (MLS jokes!)  5 teams are jammed in the middle, fighting for 2 spots.

Who or What Do I Root For This Week?

5 teams are projecting within 2 points of each other, battling for the last 2 playoff spots.  Chicago's Sunday win over New York kept the Red Bulls within the Crew's reach, but also meant the Fire are now immediately behind the Crew in the standings.

Your new favorite bands this week: