MLS' big spenders in the offseason will make their first trip to Columbus of the season. Toronto FC may be without a few key players, but still have talent in their ranks.

When the Columbus Crew last saw Toronto FC, the Reds walked off the pitch at Columbus Crew Stadium with a 2-0 loss, their tenth defeat to the Black and Gold in 19 meetings.

When TFC takes to the pitch Saturday night to begin the 2014 Trillium Cup - awarded to the winner of the series between the teams - it will be a much different looking team.

This offseason Maple Leaf Sports and Entertainment, the owners of MLS' first Canadian club, opened the checkbook to bring in U.S. and England international Michael Bradley and Jermain Defoe. They are thought to have spent $100 million to bring them from A.S. Roma and Tottenham Hotspurs respectively.

These moves instantly changed the way opponents looked at Toronto.

The seasons started promising for the Reds, as they opened the year with a 2-1 road win over the Seattle Sounders before a 1-0 victory against D.C. United in their home opener. The team was brought back to Earth in their third game, with a 3-0 shellacking at the hands of MLS Cup finalists Real Salt Lake.

"It's tough to play in Salt Lake," Berhalter said when asked about the game. "I've played there a number of times and it's not an easy place to play. I think [Toronto] performed well in Seattle, they performed well at home against D.C. so those are the games we're keying in on."

Midfielder Wil Trapp believes there is some things the Crew can take out of their opponent's first loss.

"Salt Lake has a similar style to ourselves so we can take bits and pieces of where [Toronto] got exploited and try and implement them in our game," he said.

Something the Black and Gold may note is the possession. Real had 60% of the ball in the game, which helped limited TFC to just three attempts on goal. The Reds have not been a possession oriented team this year, instead relying on the clinical finishing of Defoe.

Toronto head coach Ryan Nelson may have to turn to plan B for his trip to Columbus, as Defoe will likely miss the game with hamstring injury.

"Really? That's great," Berhalter said when told Defore was probably out. "Obviously it would help us if he's not playing but they have other capable guys who can come in. You look at Dwayne De Rosario, he's been a top forward in the league. Gilberto is a very good player. They have a good group."

The other capable guys are yet to produce this season. Defoe has scored all three Toronto goals on the year and missing someone that dangerous really hurts and team still searching for its identity.

Defoe will not be the only absence for TFC. The Reds will be without captain Steven Caldwell, who was suspended by the league for a reckless tackle on Salt Lake's Ned Grabavoy last week. Jonathan Osorio, who partners Bradley in the midfield, missed last week's match with an injury and is still questionable. Finally, goalkeeper Julio Cesar and defender Doneil Henry are both carrying knocks, but are probable.

Those that do lineup on Saturday will go against a Crew team off to its best start in franchise history. Trapp says they are confident and want to continue their play.

"We're confident after the last three games," he said. "We've been playing well and keeping the ball well. I think it's another game. Every game we're going to come out and try and play our style."

After dazzling the fans in the first home game of the season, Berhalter and his players are eager to get back in front of the local supporters.

"We can't wait," he said. "We know it's going to be a very hard game but we're excited to have the fans behind us."

It will be yet another measuring stick for the Black and Gold in this young season as they look to keep their hot start alive and place one hand on the Trillium Cup. 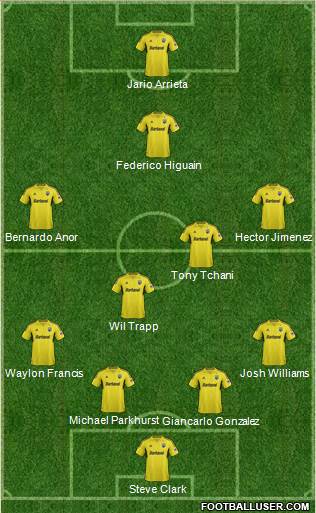 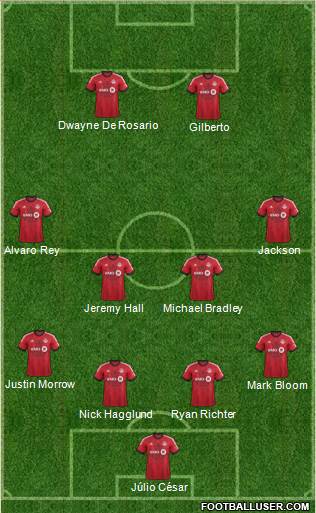