A Downtown Stadium "Would Be Very Difficult"

Lost in the shuffle during the Crew's whirlwind start and the resignation of a team president is Columbus Mayor Michael B. Coleman's comments on a local radio station last week regarding a downtown stadium. Long story short... it's not happening. That is, unless Anthony Precourt opens his checkbook.

Share All sharing options for: A Downtown Stadium "Would Be Very Difficult"

Winning solves everything. Or, at the very least, makes fans forget.

The Columbus Crew seem to be proving that old sports saying to be a very powerful one. This year's great start has fans buzzing and the pundits around the league placing the team atop power rankings so it's not surprising that some nagging questions that otherwise might be pressing, get pushed to the back burner.

One of these nagging / persistent questions is one that tends to accompany speculation around the team's re-brand.

A badge change is already in the works but what is the future of the Crew in her current home, Crew Stadium? It's a question some long time fans have been asking but not getting any definitive response on. Until now.

Mayor Coleman: "Tough… very tough. But having said that I think that Crew Stadium needs to be downtown. I think downtown is a great location for the stadium or in the downtown market area, but I think realistically to get public money for a stadium at this time for the Crew would be very difficult. In light of all the other commitments we have out there and all the other things we have to do in our neighborhoods, yeah... I don’t think now is the time to do that with our public resources." 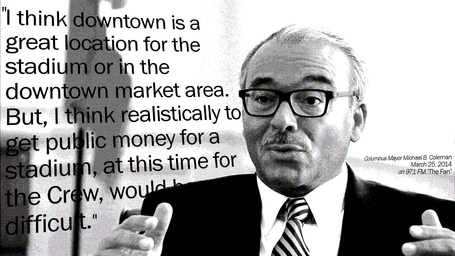 The Crew conversation about moving downtown turns into a discussion about the city investing in the Blue Jackets and later in the interview Mike Ricordati, host of the Common Man and Co., asks Mayor Coleman about the financial commitment the city of Columbus made to the team.

Ricordati: "The city made a financial commitment to the Blue Jackets. What would it be like if they magically went away?"

Mayor Coleman: "It wasn't for the Blue Jackets, it was an economic commitment to the city... Let's save the jobs, let's build upon the economy, and so let's make the investment... it wasn't about hockey, it was about the city and about our jobs."

What's clear when listening to the full interview (at bottom of post) is that Columbus, as a city and community beyond the Ohio State Buckeyes, is heavily invested in Nationwide Arena and her full time tenant the Blue Jackets of the National Hockey League.

What is also clear now is new Crew owner Anthony Precourt is facing impossible odds in getting any help moving the Crew downtown.

It's refreshing in a way, as it leaves only a couple options for the team over the next couple decades; Move the team to a new city, get good attendance for a few years, new tax funded stadium in a pro sports thirsty city and a good short ROI, or... stay off I-71 and Hudson in the oldest soccer specific stadium in league history and continue on as the home to one of the oldest running professional soccer teams in US history.

The local NHL deal doesn't end until sometime in the 2030's. That's a long time. For me? I'm thinking Crew Stadium is good for another half dozen "Dos a Cero's." But that's me - I don't have a $60+ million dollar investment tied to a professional team playing at a state fairground and whose move downtown is frustratingly blocked for a generation during rapid growth.

The full 97.1 FM "Common Man and Company" interview is well worth the listen, but if you are only interested in the Crew bits they start around the 13th minute.