In the second installment at how Gregg Berhalter sets up the team, we look at the back line when pressed back.

Share All sharing options for: Another look at Gregg Berhalter's defensive philosophy

Last week we broke down the Columbus Crew's defensive system when the Crew are in possession of the ball (you can read story here). While the Crew enjoyed the majority of possession against D.C. and Philadelphia, there were times when the Crew had to resist attacks from D.C. This week we are going to take a look at how the defense operates when not in possession. This time around, instead of focusing primarily on the back four plus Trapp, we will be looking at the team as a whole. Berhalter, through pre-season and the first game, has seemed to line up the Crew in a 4-2-3-1 formation. It is certainly obvious that Berhalter has set clear guidelines for each player when it comes to defending. (All video and pictures from MLSsoccer.com)

Let's take a look at some examples from the opener against D.C. United 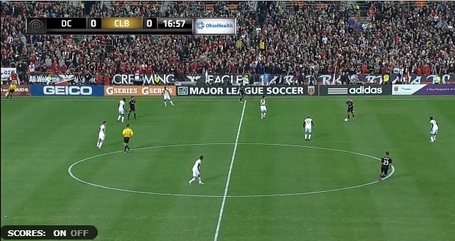 When DC had extended possession, this his how the Crew defensively set up. The outside midfielder on the side opposite of the ball (Jimenez above) would tuck inside to help clog up the center of the field. Also, the outside backs are expected to slide into the midfield on many possession to help deal with D.C. United’s outside midfielder or defender. Francis is doing just that on the far side of the field. This allows Trapp and Tchani to deal with any players in the more central area of the field. It also gives appropriate cover when one of them steps further up the field to press the ball (more on this later). Arreita, like a lot of forwards, is responsible for directing the ball in one direction. By helping show the ball to one side of the field, the rest of the defense is then able to appropriately set up the correct defensive position.

Here is a good example of how the defense and midfield slide across the field as the ball moves from side to side.

This sequence begins with a throw in for D.C. in the Crew defensive 3rd of the field. As Tchani stands up the player with the ball, it gives Higuain the extra time to get back and pressure the ball. The pressure from Higuain is important as he forces the ball to be played backwards. Take note of how far Jimenez has tucked into the center of the field. As the ball is beginning to switch sides of the field. Jimenez, Williams, and Trapp all read this, and quickly close down the ball and open spaces.This results in United, again having to make a back pass and restart their attack.

When D.C. passes the ball horizontally, it allows the Crew to easily read the game. It makes everything very predictable, and allows the Crew to keep the ball in front of them. D.C. had a hard time finding threatening passes or creating quality opportunities that would unbalanced the Crew defensive formation. This resulted in D.C. having to bypass the midfield and directly target the forwards. Also, with Higuain helping Trapp and Tchani clog the middle of the field, D.C. found it difficult to generate options and unsettle the center of the field.

Here again the Crew are set up in a similar position as highlighted before. United, with limited short pass options, are once again forced bypass their midfield options. 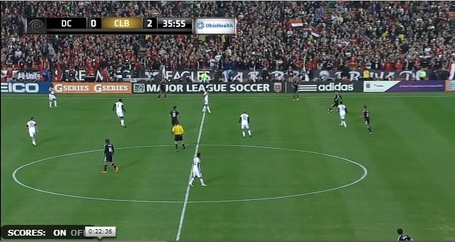 The Crew are allowing D.C. to possess the ball in their half and not employ a high pressure strategy. This keep gaps from appearing defensively and making the game predictable for the defense. 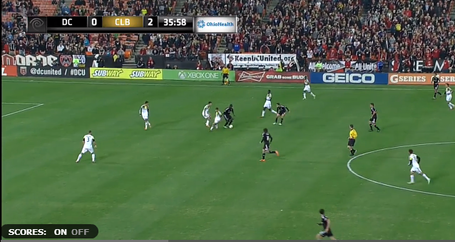 The long ball is played into Johnson’s feet. Trapp and Tchani both turn and try to recover or pressure the ball. However, because EJ is able to hold on to the ball, four other D.C. players are able to move forward and join in on the attack. Both Jimenez and Anor are trailing behind the play, as they were engaged further up the field defensively.This is one of the few examples of D.C. actually getting the ball forward with sufficient numbers when the Crew are not set defensively. As like much of the game, the Crew defense is able to recover and prevent United from mounting a dangerous attack.

Spacial awareness is a defensive principal that will be incredibly important to the Crew. A team can become unbalanced defensively when a player loses the proper spacing between himself and his teammates. This can be the result of several different movements from the offensive team. When the defense loses its shape, gaps or holes will appear that the offensive team can take advantage of. When the Crew did not have control of the ball, they did a great job of spacing themselves appropriately in relation to each other. One of United’s best attacking movements came late in the game as a result of a Crew spacing issue. 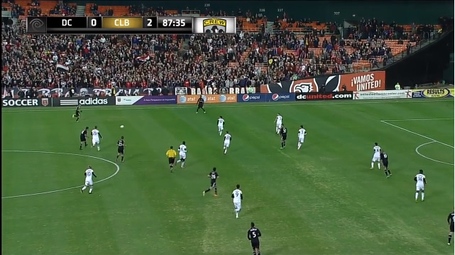 The Crew drop back into their familiar defensive positioning. Like most of the game, D.C. is struggling to get players in advanced positions. 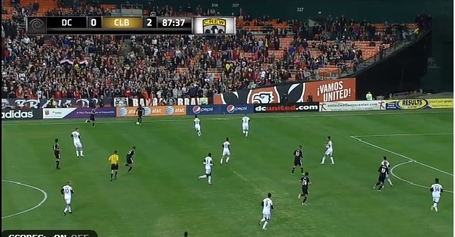 A few defensive principles start to go haywire as the ball moves wide. Williams and Anor move towards the ball to pick up the player with the ball and the runner just to his right. In this instance, Williams finds himself being sucked to the outside, which creates a space behind him . Perry Kitchen, just in front of the referee, reads Williams movement and begins a run from the midfield. Trapp does not recognize the run from Kitchen quickly enough, and results in Kitchen getting control of the ball on the outside edge of the Crew’s box. 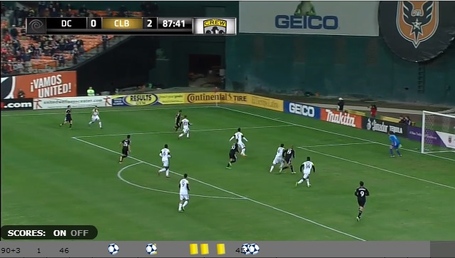 This is one of the few times United was able to get 4 guys into dangerous attacking areas. 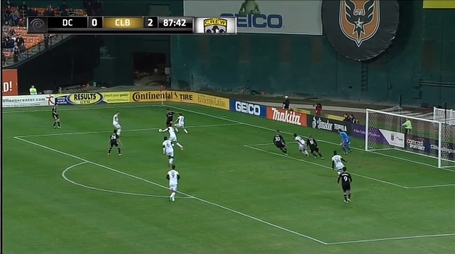 After receiving the ball, Kitchen pulls it back to look for options. Gonzalez reads the short pass to the player near the top of the box. He jumps out of position to close down the passing lane. While doing this, he leaves Parkhurst in a 2 v 1 situation on the 6 yard box. Francis is unable to help due to the presence of an attacker at the back post. Luckily for the Crew, Trapp is able to block the cross to smother this dangerous situation.

The Crew are going to be a tough unit to break down if the opposing teams are unable to unbalance the Crew defensively with vertical passes. When the Crew are able to set themselves up defensively and force the opponent to pass the ball horizontally, they will be hard to break down. With the outside midfielder on the weakside tucking into the middle, along with Higuain dropping centrally, it is clear Berhalter has laid claim and will own the middle of the field and and force the attacks wide. Much of the Crew’s defensive success will depend on how well they hold the middle of the field. They were able to dominate possession of the ball and control the middle of the field against United and for long stretches against the Union. Time will tell if they are able to do so against tougher competition this season.