A first look at Gregg Berhalter's defensive philosophy with the Crew

In the first of several looks at how Gregg Berhalter sets up the team, we look at the back line when the Crew has possession.

Share All sharing options for: A first look at Gregg Berhalter's defensive philosophy with the Crew

As the saying goes, "the devil is in the details" and for the first time since Gregg Berhalter took charge of the Columbus Crew, we got to see the details of his coaching philosophy in a regular season game. The preseason had been a primer of what to expect from Berhalter’s team, but cautious optimism seems to be the general rule of thumb for Crew fans. The players have spoken to how different things are now under Berhalter compared to former Crew coach, Robert Warzycha, and fans were interested to see the impact of those changes on the field. What we saw on Saturday was very different than what we had witnessed over the past several seasons. Most importantly, Columbus took a full 3 points on the road against Eastern Conference foe and long time rival, DC United.

I am sure there will be many articles in the coming months that will discuss the changes of formations, philosophies, and styles that have taken place over the off-season. Today, I want to tackle what I consider to be the building block of how the team plays. Berhalter has stated that his teams will try to dominate possession and play a pass oriented style of soccer. While those words are nice to hear, they do not give us much explanation on how he aims to achieve that with the Crew. Throughout the preseason, and again on Saturday, we saw what looked to be very defined roles and expectations for players. Today we are going to take a look at the back four of Williams, Gonzalez, Parkhurst and Francis and how they positioned themselves offensively and defensively. However, it is very clear that one can not look at defensive structure without also including Will Trapp.

Berhalter has not been shy with piling on the expectations he has for Trapp, that includes naming him captain for a game in the preseason and vice captain for the 2014 season.. The confidence placed in Trapp was on full display on Saturday when we got to witness how he would be deployed under the new coaching staff. Systematically Trapp is maybe the most important cog in what Berhalter is looking to do. This was clear within the first 10 seconds of Saturdays game. (All videos and photos are from MLSsoccer.com)

Trapp receives the back pass from Higuain and immediately passes the ball to Gonzalez. This would be a very typical beginning movement, except what Trapp does next tells us exactly what he has been instructed to do. He moves into a position in between Parkhurst and Gonzalez. As he does that both of the center backs jog wide, and both outside backs push higher into the attack. This is a very telling moment as it shows us the beginning of how Berhalter wants the back line to operate while in possession

Here is another example of how Trapp will drop into what would normally be a position for a center back. Both Parkhurst and Gonzalez again split wide as the outside backs push forward into the attack. Look especially close at the end of the clip.

Trapp notices a moment for him to step into the midfield and receive a ball from Higuain. He then sprays a pass to Francis on the left side. At that moment, the Crew have 8 players in the attacking end. By Trapp positioning himself deeper on the field, and allowing both Francis and Williams to move farther forward, when the possession finally builds both players are available in the attacking 3rd. They also provide width into the attack since both are pushed very high. Let’s look at one last example of how the back four will operate when in possession. 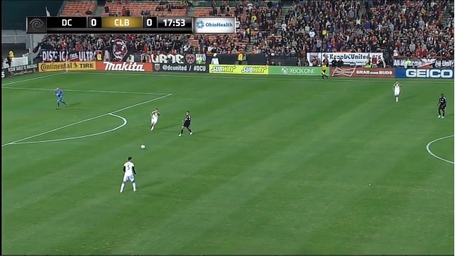 Trapp receives the ball from Parkhurst after he suffers a foul. Trapp quickly plays the ball out to the right channel where Gonzalez is now operating. 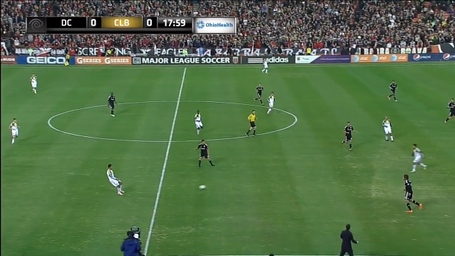 Gonzalez dribbles the ball to the halfway line. He and plays a pass into Jimenez’s feet. Jimenez has tucked in and created the space for Williams to charge forward down the sidelines. Notice when Gonzalez plays the ball, Williams is not even in the frame because of how far forward he is. 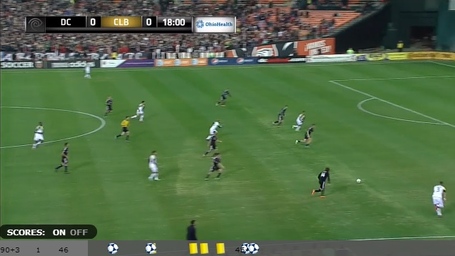 We have seen the positives of playing the system that Berhalter is currently utilizing. However, there are weaknesses to playing in this style. Fortunately for the Crew, D.C. was not able to successfully expose those weaknesses. Let’s take a quick look at how the Crew, and especially Will Trapp can cause some self inflicted wounds. 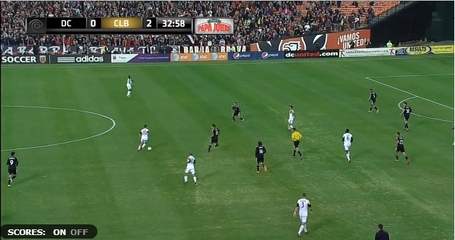 Trapp receives a short pass from Higuain in the midfield. Notice the position of both Williams and Francis. Both are pushing into the attack. Also, Anor, Tchani, Jimenez (not pictured) and Arrieta (not pictured) are in advanced positions. Trapp tries to play a penetrating pass into Anor’s feet. 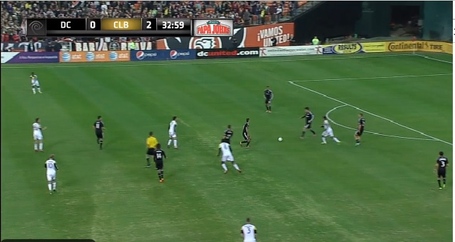 Trapp’s pass is not accurate enough to find Anor. Because Williams and Francis have pushed this has left the Crew vulnerable to the counter attack. Credit to D.C. for recognizing the Crew have possibly over committed players to the attack and they looked to take advantage. 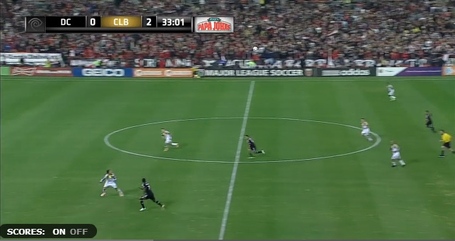 This leaves Parkhurst and Gonzales in a dangerous 2v2 situation. Gonzalez is able to win the ball in the air and quickly stomp out any danger. However, a better outlet pass and D.C. would have found themselves in a fantastic position to attack the weakened Crew defense. The Crew were very disciplined against D.C. and did not create a lot of trouble for themselves by needlessly turning the ball over. In this system it has become even more important to not turn the ball over in the midfield as both outside defenders are now joining into the attack, leaving center backs to deal with the opposing forwards.

What we have started to learn from the D.C. game, is that Berhalter is asking the outside backs to charge forward, but only because Trapp is positioning himself deeper than a traditional defensive midfielder would while in possession. This allows both Parkhurst and Gonzalez to spread wide and essentially play as outside backs in giving support to the midfield. It is evident that Berhalter is implementing a system that Crew fans have not been exposed to in a long time. The back lines ability to perform in Berhalter’s system, is key to allowing the rest of the team to perform in their given roles, and ultimately a successful season for the Crew.

The shape completely changes when the Crew are not in possession. Next week we will look at the shape of the team when they do not have possession of the ball.