Berhalter, Parkhurst and Clark are putting meaning back behind the word "professional."

Change means more than just new people. It also means new philosophies, new culture, new approach. Right out in front of the changes this offseason has been new head coach Gregg Berhalter, Micheal Parkhurst and Steve Clark. Three men who have extensive resumes outside of not just Columbus... but MLS.

"The hope is that you have three No. 1s and only one plays. You’ll never be able to tell me that I’m not a No. 1 goalkeeper. That’s who I am, and that’s who I was even when I came out of college."

This first quote is that of a player who has confidence in his ability as a player. There is no "I hope I'm the guy for the job" or "whatever is best for the team," that fans in Columbus have become familiar with.

Clark see's himself as the best option, period. This quote didn't ruffle any feathers like the next two coming up but it is something of a different tone. A more professional tone. A tradesman who values his craft.

"If I wasn't involved with the national team, I would have stayed in Germany. The family was happy, the level [of play] was good. I wasn't getting the games, but financially it was the best contract of my career. So if I didn't have a chance for Brazil, I think I would have stayed."

Parkhurst is making the decision to come to Columbus one that meets his goals. A part of the Crew support took his remarks in the article as a sort of dismissal. Like they, the die-hard fans, are being used as just a tool for him to achieve the goal of getting on the US World Cup roster.

While the MLS single entity structure isn't unfamiliar to US sports fans it is completely unorthodox in the rest of the world. Gregg Berhalter has spent the last few years of his life working in a different performance based environment at a coaching level were your failure not only dooms you personally but also dooms those of an entire soccer community that gets regulated to a lower tier.

Last week Berhalter told MLSsoccer.com that he got an email from Toronto FC about the availability of Matias Laba, a younger Argentinian player that has loads of potential but trapped in MLS roster rules purgatory.

When asked about bringing the player to his team, Berhalter gave his assessment of the player, saying:

Fans in the comments section sort of lit up Berhalter for not knowing the player carried an injury which contributed to his reduced appearances. They also commented on Laba's talent level. The general consensus was/is that Laba is a good player (this writer happens to agree there).

A coach giving his open opinion on a player is a refreshing change to most of what we hear in MLS. In fact, a little too open perhaps because Portland Timbers owner Henry Merritt Paulson III decided it was his place to reel him in. 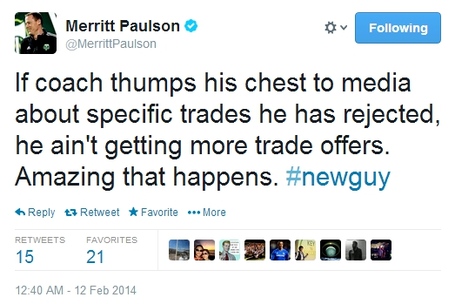 While Paulson's response highlights the stomach turning single entity backroom-dealing-boy's-club facts fans have to live with it also highlights the differences in which a coach / player / executive that has global experience views the competitive nature of the sport.

Berhalter's comments on Laba show his priorities are with the team he has been charged to manage - not the league.

Over the past few years the Crew have been collapsing in on themselves and acting inwardly. Each offseason saw more turnover, more attrition. Along side this you also saw the team put a premium on bringing in local talent and retaining long time employees.

The bi-product of this was a lot of talk about "family" (which spread to advertising) and a coaching staff that liked to talk about acting like a "professional" or being "a real pro".

The family side of the Crew organization is fine but when you try and juxtapose it to a professional one the previous coaching staff talked about, you get what the Crew had become; A dangerous mix of favoritism, nepotism, fear and even some paranoia.

These are not guys that were in the stands as a kid old back in '99 dreaming to play for the team. Nor were they getting Chipotle with parents on a Crew Academy team trip.

There is no home cooked mac and cheese meal by mom to go home to after a loss (this was actually referenced during a local game broadcast last year) and no best bros to hit the town with on off days.

These are guys in town to improve their chosen careers. To get ahead. To support their family. To do their job better than the guy trying to take their spot.

While it might put off some here it Columbus... this is professional - and it is one of the critical ingredients of any successful organization.