2014 is here which means the offseason is quickly turning into preseason. Here's an up to date look at the Crew roster and what it tells us to expect near-term.

After a frantic start to the offseason things have gotten pretty quiet in terms of moves for the Columbus Crew but training camp is approaching fast. Time pull the roster into focus in front of what will be a busy next 60 days for the franchise.

Here is the budget snapshot as of the start of the new year... 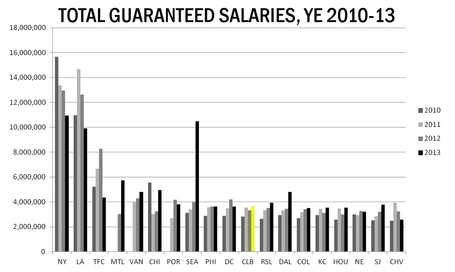 The Crew currently stand at 25 players (line E.) on the roster and have a healthy amount (Line H. $1.01 million) of money to spend. Even if they are carrying some of Chad Marshall's contract, the team still stands to have >$750k to spend on just 5 spots. That's the most open space I've seen the Crew have in January since 2010.

With the college draft coming up in a couple weeks it appears the team will run out of roster space before the run out of money leading some to believe a decent sized summer signing is imminent.

An important note about 2014 figures is that they all include estimated pay increases which are based on general observations since the last MLS CBA in 2010.

A few notes here: Chad Marshall was traded to Seattle, Eddie Gaven has retired, Andy Gruennebaum traded to Sporting KC and Kyle Hyland was picked up by new NASL side Indy Eleven.

It's possible that I've got Waylon and Clark are swapped. Leaving it be for now.

NEXT MOVES, WHAT TO EXPECT

Outside of one "big" and two or possibly three MLS quality (game day 18 type) signings, do not expect a whole lot. What you see above is likely what the first bit of 2014 will look like.

As mentioned above, the needs outweigh available roster slots so expect the roster to shuffle most of the year depending on which transaction window is open (MLS has many).

Important Reminder: This is a layman's summary. I am a hamfisted operations guy, not an accountant (nor do I have any inside info, just using publicly available MLS Players Union data). But! I've been keeping tabs on MLS budgets for a few years now so I'm confident these is close enough. Thanks for reading, please leave any comments / questions below or email me ljbaby654@gmail.