Late round draft picks are less and less important in the wake of homegrown players. Will Tuesday's SuperDraft 3rd and 4th rounds produce future stars? Not likely for the Crew.

The Columbus Crew are undergoing seismic shifts in their organization.  With new ownership, a new FO and coaching structure and a new Sporting Director/Head Coach, many new faces in the Crew organization will learning on the fly for the beginning part of 2014.  There will probably be one more fresh face coming to training camp after tomorrow, as the Crew have the 4th pick of the SuperDraft's 3rd round (Their 4th round pick was sent to Chicago in the Daniel Paladini trade).  Will this player make an impact in 2014?  Before answering that question, I took a look at trends in the roster spots and minutes played in recent Crew history.

A large change has been happening on the field as well, which began in 2012.  The Crew's academy program has started producing homegrown players at a blistering clip, with Ben Speas and Matt Lampson the first to see the field in 2012.  Total minutes from homegrowns jumped from 0 in 2011 to 204 in 2012 (less than 1% of total season minutes) to 5106 in 2013 (over 15% of total season minutes).  Assuming all seven current homegrowns make the 30-man roster, homegrown spots have steadily risen to a current 7 out of 30; this represents nearly a quarter of the team and is makes up the largest portion of the team.

With this sudden influx of players acquired from Ohio, someone has to be getting the squeeze.  To determine who that is, I compiled minutes played for the last three years. 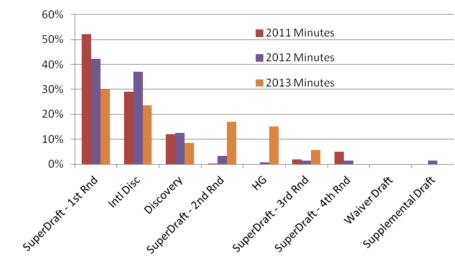 Above, you'll see that the largest drop from 2011 to 2013 in minutes was in the SuperDraft 1st round picks.  1st rounders went from making up 52% of the minutes in 2011 to just 30% in 2013.  This accounts for nearly all of the 15% that homegrowns have picked up.  As the Crew continues to increase the portion of its roster comprised of homegrowns, expect the on-field shift to continue as well; I'd estimate it will land at between 20-25% of total minutes in 2014.  Will their familiarity with each other lead to improved results?  We shall see.

Finally, let's take a quick look at how the SuperDraft 3rd and 4th round picks have fared for the Crew over the last few years.  Bernardo Anor was a 3rd round selection, and he has seen and will continue to see plenty of minutes for the black and gold.  Other than Anor, Shaun Francis and Kevin Burns were the only 3rd or 4th round picks to see more than 300 minutes over the last three years.

So while one might assume that homegrown players are taking over spots that might typically go to lower round draft picks, in reality the shift is even more substantial; they're taking time from guys who were 1st rounders.  With that in mind, it seems the later rounds of the SuperDraft will be even less likely to produce tomorrow's stars for the Crew.