Each week, I update the Columbus Crew's playoff outlook based on their results and the those of their MLS Eastern Conference foes. This week the Crew went to Texas and messed with Frisco.

Current Playoff Outlook: This is Doable

Another Crew victory this past weekend keeps the Crew within striking distance of a playoff slot. Two of their final three games are at home, and their home & home against the Revolution is against a team that has won only one game in the last month. Breaking Bad and family fun cut my writing hours short this week; make sure you catch the podcast for the full scoop. But the Crew are storming into the post-season picture; if they win the last three games, they could potentially climb to 4th place in the East and host the Wild Card match.

Here's the view since June 30: 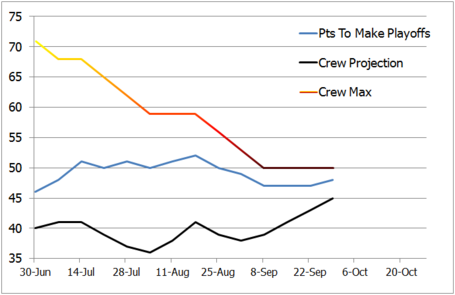 With their tie, Houston didn't join the upper echelon of the of the East this week. New York, Sporting KC and Montreal remain essentially un-catchable for the Crew. Chicago faces DC and Toronto in the next three weeks, and controls its own destiny against the Crew. The Crew's playoff hopes may dangle in the breeze on October 27, when the Fire face NYRB in a kickoff that starts one hour after the Crew's.

I still see a loss as torpedoing the Crew's chances of playoffs, as it would limit their maximum points to 47. The other two scenarios that remain are winning two and tying one or winning all three. The standings, sorted by PPG:

Seattle and New York's tie leaves this race up in the air.