You can learn a lot about your favorite team by playing this game. Here is a summary of how the folks at Electronic Arts see the Columbus Crew at this very moment.

Share All sharing options for: The Crew on FIFA 14

Electronic Arts rates each player in a little over 30 categories that range from physical attributes to technical skill so it can be a little daunting when trying to figure out how good the digital version of a player is.

Outside of the more simple things like transfer value and overall rating (a poor indicator of what a player can contribute) I took it a step further.

In order to simplify things a bit, I've taken 28 of the most valuable attributes and grouped each of them into four simple categories (on right on table).

"All" (on far right) is a Net Promoter type score. It takes a player's Green and Yellow (above average) attributes and divides them by Orange and Red (below average) and works out an overall score. Higher number the better. Green is preferable, but don't see a lot of that at this level.

Underneath the chart will be further explanations. This is a list of outfield players only.

Overall Rating: This is a number to give you a general idea of how good a player is

Green: Excellent, what you need in a player

Red: Poor, avoid a player with a lot of these attributes

What makes this game fun for more experienced players is building your team to fit your particular playing style. For example: Ethan Finlay has some excellent attributes for a team that plays with a couple forwards to cross the ball in to from the wing (real life Crew have none).

You also see that Eric Gehrig might not have the highest numbers but he doesn't have a lot of horrible attributes that can hurt your team on the field. Improving your weakest link. Possibly the most important thing in a league structured like MLS.

I've found in the past however many years in playing this game with MLS teams is that October is ripe for the league. Rosters are correct and the 'form' feature is updated regularly. Which makes the fact that so few people play the game as a MLS team a shame. In my years playing this title online I've found very few people that play as an MLS team online. This is also the reason we don't see MLS stadiums or players names coming out of the announcers voices.

This is the last version on this current generation of console and as a console based game it will be getting a new upgrade when the Xbox One and Playstation 4 are released later this year. So, enjoy this one before they start tinkering around in a bigger digital universe and newer iterations get buggy.

FIFA 14 is stable, balanced and fun. Best attribute for this year's version of the game? You can tell the difference when playing average to poor players. I know that sounds like a backhanded compliment -- but for a guy that spends most of his time with the Columbus Crew online and trying to take the Northampton Town Cobblers from League Two to the Prem? It's much appreciated. 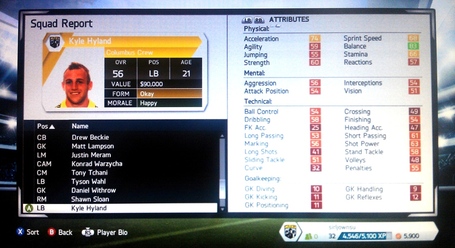