Each week, I update the Columbus Crew's playoff outlook based on their results and the those of their MLS Eastern Conference foes. This week the Crew ran faster, jumped higher, dismantled and embarrassed the Chicago Fire to keep their slim playoff hopes alive going into the final 4 games of the season.

I said last week that a win against the Fire, "could ignite a full-on sense of optimism that this season could be saved." The only thing that prevented that was the fact that the Crew got no help from other results Saturday night. They played inspired soccer by tackling harder, passing smarter and eating more in-game pizza than their Bridgeview-based opponents. This is the team that I can't help falling in love with. With wins in three of the last four, Columbus is nearly in control of its own playoff destiny. More on their future in a bit; here's the view since June 30: 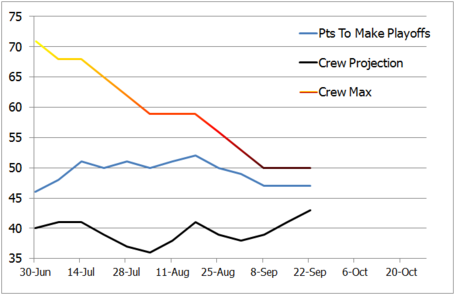 I'm no longer convinced the Crew even need any help to make the playoffs. If they win their last four, they'll be at 50 points. If they win three and tie one, 48 points. Either of these could (but would not necessarily) result in playoffs.

By winning out, the Crew would jump New England in the standings (currently 2 points behind, but the Revs have a game in hand). While Philly plays TFC & DC (6 points), their other three games are against SKC (twice) and at Montreal. I don't see the worms getting 6 points in the non-TFC/DC games, which they would need to get to stay ahead of the 50-point Crew and get to 51. Chicago also plays TFC & DC (6 points), but faces three difficult games against Montreal, Dallas & NYRB. Same deal with the Fire; I don't see them getting to 51. That means the Crew would have hopped into the 5th place spot with 4 wins. Houston would need a bit of a meltdown to not get to 51 points with 43 points already and DC yet on their schedule, but anything's possible when your other four games are all against teams currently in playoff position, which they are.

If the Crew were to give up two potential points by tying someone of these last four games, the Dallas match this coming weekend would be the best one at which to do it. While it wouldn't be any worse in the standings to tie un-catchable SKC, that one is a home game and only winning at home is acceptable. Finally, giving up any points to New England in their last two matches might doom the Crew. The standings, sorted by PPG:

First, the Crew have been eliminated from this race as of Sunday night. I still think this lil' section is still relevant to Crew interests in terms of home field advantage for the playoffs, CCL, etc., so I'll keep including it in the 4caster. If you hate this idea and don't want to watch as Seattle wins another piece of silverware, please cry out in rage and disgust. I have a Crew-only rule for this column, and this section is now a lil' borderline. That said...

Seattle extended its lead over Salt Lake and Montreal this week with its tie, compared to losses from both. They are now projecting to end with 3 points more than their closest competition (Red Bulls) and can max out their points at 68 while the next closest teams in the chase can only get to 63. Next Sunday's Sounders-Red Bulls showdown in the land of Hendrix looms large.