Each week, I update the Columbus Crew's playoff outlook based on their results and the those of their MLS Eastern Conference foes. This week the Crew hosted Seattle, gained a one man advantage almost immediately, then failed to score.

Current Playoff Outlook: As Bright as a KMFDM Song

Putting together this week's column reminded me of the last lines from industrial legends KMFDM's 1996 track, "Dogma." (WARNING: NAUGHTY LANGUAGE. AND THE CHICK SOUNDS KINDA SCARY.)

Not so much a song, it's an industrial death march featuring a kill sergeant spitting at you. It's the type of unfriendly head check the Crew could have used in their locker room in May.

That said, the loss to Seattle this week burned the beans of any chance the Crew had of making the playoffs. Scenarios as recent as last week would have required three to four game win streaks but also included the occasional tie or loss; now "mathematical" is a required modifier if one's talking about the Crew's playoff possibilities.

To further document their downfall, I've included the Crew's maximum points attainable as a line in this week's playoff-tracking chart. This displays that if they won every game from here on out, the Crew would hit 53 points; that's just one more than last year's non-playoff worthy total of 52, but currently a smidge above this season's current projection of 49. Here's the view since June 30: 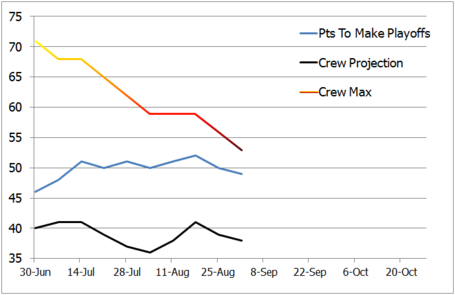 Montreal held court with their away tie this week, but New York and Sporting KC solidified their playoff hopes with wins. Houston, Philly, New England and Chicago will duke it out for the last 2 spots. Of these teams, only Houston will be dealing with CCL.

I took another look this week at the combined PPG of the teams the Crew has beaten this year: 1.04. Kind of says it all.

Below are the standings as of 8/25, sorted by PPG.

The Crew would have to win 6 straight before they could expect to be in playoff position. That would be game 32, on October 5. If the minimum points moves up from 49, it may take winning each of the last 8 games. So, there's that. 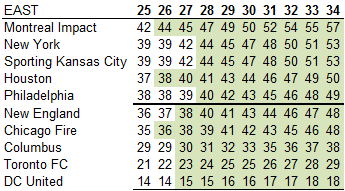 I'm not including Kansas City in this group yet, but I think they have a shot at being listed soon for the reasons listed in the "Projected Points To Win the East" Notes. The way RSL's playing, though, the road to MLS Cup could look a lot like I-15.

The United States of America. The table below is lifted from another article of mine in which I tried to figure out which scenarios would mean that the US could clinch their World Cup berth on the field in Columbus. I meant for it to be a kind of "pocket guide" to watching the Costa Rica match. The "Likelihood" column tells you how likely I think each of the scenarios is to happen on Friday night. To read the entire article, click Frankie. 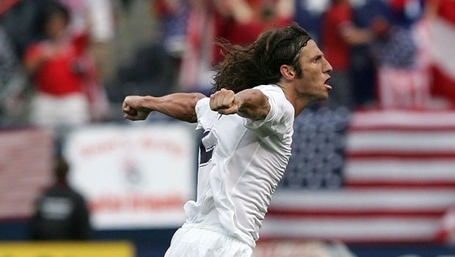 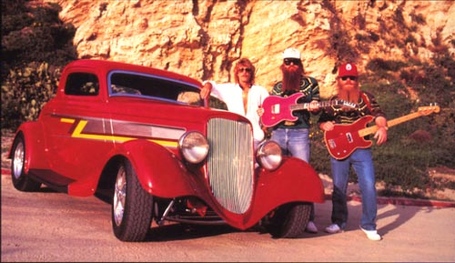 DC United
They are still the worst team in the league; I will include this statement every week it's true.

The next game that Houston or New England tie or win, DC is out. Or, the next game that DC doesn't win, they're out. A tie or loss this week vs. Houston is unacceptable from the must-win Crew. However, should that nastiness go down, you can raise one of your shot glasses Wednesday to DC's official ouster. I mean, what else is there to celebrate at that point?

Toronto FC
Tied the Revs, which was a good thing for the Crew's playoff hopes and for Duncan. An opportunity squandered. TFC probably won't have their worst season ever (last year), but will probably their second or third worst ever. Not surprisingly, the situation has improved up north since Duncan arrived. He may be saving his friend's job.

Columbus Crew
Rules are rules. Safe from inclusion in this section last week, the Crew are back in the embarrassing position of being lumped in with the teams eliminated before October.