The Chad Marshall and Dominic Oduro scored, but really it was Federico Higuain that spurred the team on to victory.

The team's offensive leader was instrumental in both goals. His passing, while not sharp at 66% completion rate, was incisive. He had two key passes, including a perfect through ball that set Oduro one on one with Troy Perkins in the 10th minute on top of his two assists. His free kick was extremely well taken and allowed Chad Marshall a great angle to run up on the ball and smash it home.

His play to create the Crew goal out of thin air in the 79th minute however bears closer scrutiny. The Crew aren't applying a suffocating pressing game, but Oduro is staying high and Higuain is floating to put some pressure on the ball. With Agustin Viana pushes up to put Montreal's Justin Mapp under slight pressure when he receives the ball. Mapp plays soft back pass towards Hassoun Camara that Higuain intercepts.

At this point, Camara is now in position to pressure Higuain, but Pipa reads the space and plays it past Camara towards the left wing that Camara has just vacated. 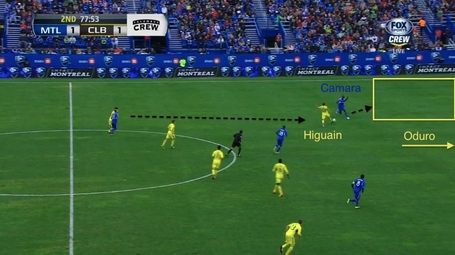 That touch puts Higuain into space during transition. His options are limited as only Oduro is forward. The closest midfielder is Tony Tchani, who is 15 yards behind the play. Of note, Ethan Finlay is already reading the play and is making the start of a back post run. 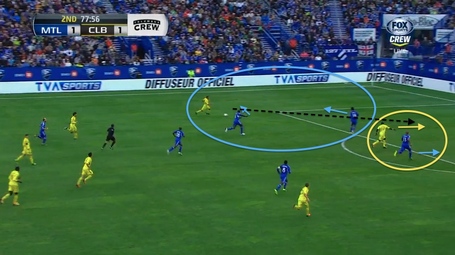 Now it's clear that Higuain is in space with room to make an attacking move. Camara is still recovering, so Allesando Nesta rotates over to close Higuain's lane to drive into the box. It's here that Oduro is now isolated on Matteo Ferrari just outside the box. Higuain plays a brilliant outside right foot cross to where only Oduro can get to it. The Ghanaian taps it past Troy Perkins.

This is where you can see hard work paying off. Tchani and Wil Trapp move forward, but are aware of their defensive responsibilities. Bernardo Anor and Viana are pushing high to provide attacking support. Finlay's early read of the play is allowing him to get into an advanced position if the play broke down and Higuain needed other options.

The sequence took less than 10 seconds of game time and was created out of a moment of individual brilliance. There was little Montreal can do once they turn the ball over. The defense is out of position and is working to cover the sudden counter. Higuain's quick reaction and vision quickly turned a Montreal error into a brilliant goal.