A Travelogue - USA v. Mexico: One Hell of a Show

USA v. Mexico had nearly everything, stifling heat, the masses tailgating, 4th Street Bar packed with 3,000 American Outlaws, soccer royalty wandering around the parking lot, and of course "Dos a Cero". Undoubtedly, this edition was the best yet.

Share All sharing options for: A Travelogue - USA v. Mexico: One Hell of a Show

Tailgating in the Inferno

Arriving at 3:00 PM, I got to enjoy the pleasant 80° temperatures of of September in Columbus. No, correction, it was the record tying 95° with blazing hot sunshine pouring down. The breeze helped to cut down the heat index to a merely blistering 100°. The drink of the day appeared to be beer with a water chaser.

The heat didn't wilt the support from either side. The USA Mega Tailgate was crowded well before I came. Rows of tents marked the spot with grilles and coolers sprouting around so food and drink were always on hand. 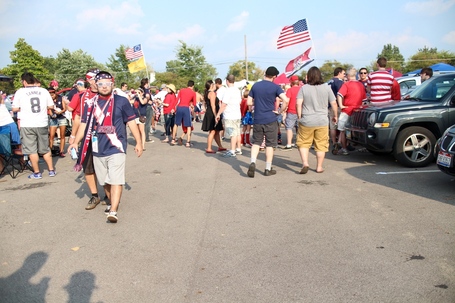 The Mexican tailgate, handily set up right next to the Americans, was awash in green. The Mariachi band never stopped playing when they arrived at 3:30 PM until I left for the gates at 6:30 PM. While Americans can rightly claim to be tailgate pros, the Mexicans went beyond the standard fair and whipped up sandwiches with pork or carne asada. The visitors acted as gracious hosts, feeding all comers no matter the color of the jersey. 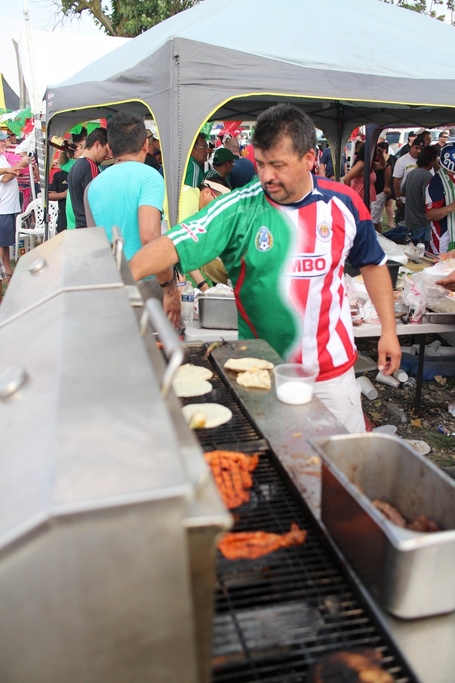 The parking lot of a USA v. Mexico game is a veritable who's who of American soccer. Jimmy Conrad and KickTV set up their RV near the USA Mega Tailgate and were prepping to do a live show. Conrad, a former national teamer, was on hand to hang out, much like in the Frankie Hejduk mold. Plenty of fans wanted to meet the charismatic Conrad and a crowd soon started showing up. 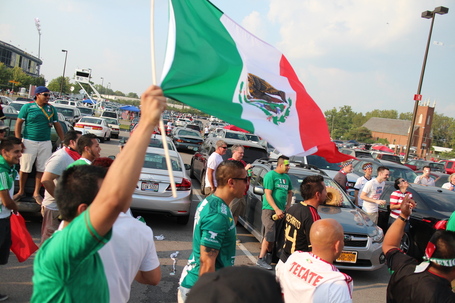 Naturally an impromptu matchup between American and Mexican fans popped up between the rows of cars. A sombrero was dropped for the Mexican goal and a small visor stood as the American goal. Home field advantage apparently didn't extend to the parking lot. 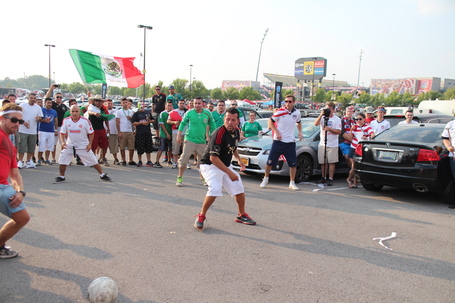 The game was good natured with plenty of flag waving and cheering from both sides as the teams played three on three. One of the countless American fans then upgraded the goal by dropping a cowboy hat. How fitting.

The game wouldn't last long as the mounted police came up on the scene and after a few minutes decided to break up the contest. Conrad nearly was knocked down by a horse, but he quickly stepped out of the way. Even in retirement, his moves were compared favorably to cats and ninjas.

Pickup soccer wasn't the only thing that drew the attention of the police. The Free Beer Movement tent was the epicenter of the USA Mega Tailgate. Fans could swap craft beers and test their palate with likeminded soccer fans. FBM was taking donations as well.

This apparently piqued the interest of the police as they closed down the event under charges of illegal sale of alcohol and operating without a license. They couple arrests, leading them out of the tailgate with a mounted police cordon. The event dampened the mood a little bit amongst the American contingent. 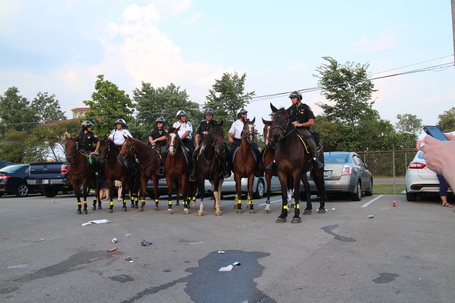 The Giant Line to Get In 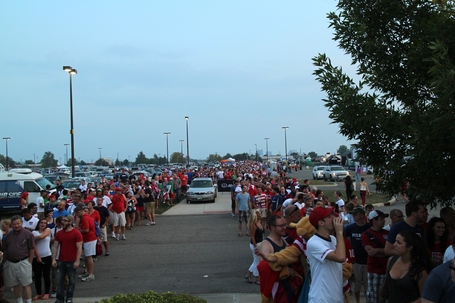 It really was like all of the others, but more. No game at Crew Stadium has been louder. On the field, the Mexicans came out quick and tried to sustain pressure, but the heat sapped their energy and the game settled down with both teams making it to halftime tied at 0-0.

This is when the small knot in my stomach started to unwind. There was something inevitable about it. The U.S. had taken the Mexican's best shot and it wasn't close to being good enough. Eddie Johnson scored just after the break and Landon Donovan made it Dos a Cero just under 15 minutes to go. Inevitable.

The tifos by Justin Bell and the rest American Outlaws Columbus were brilliant and truly set the stage for the most vocal support I've heard. The capo system with song sheets lacked flexibility and the crowd sounded better after the U.S. scored and the supporters got a little off script. 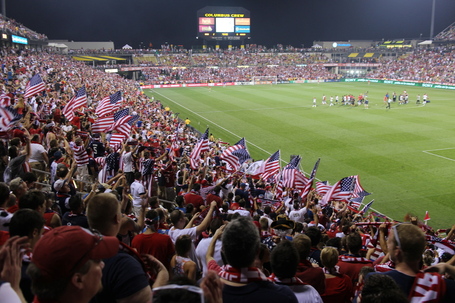 The Crew supporters provided my favorite moment of the evening when they started the "This is our house" chant after Donovan's goal and it spread across the north side of the stadium. It fit the moment so perfectly. Fans from Columbus, New York, Boston, Los Angeles, 49 different states are all part of it. The U.S. at the Home of USA v. Mexico and beating El Tri 2-0 again.

Each of the three USA v. Mexico games I've been to I've been reminded that often times the fans know each other or have a level of respect. I saw two men climbing the stairs in the supporters section, one wearing a U.S. jersey and the other in the green of El Tri. They were chatting back and forth and the only thing I heard was the response from the Mexican supporter, "This happens, EVERY TIME!". Yes it does. 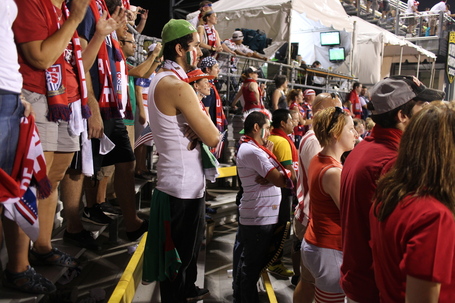 Even looking looking for trouble comes up short. Trawling through police reports only returns one complain filed yesterday. It was for assault between a Mexican and a U.S. fan. I saw a few war of words, but no real war.

A magical night needs a surreal ending. The weary tailgate gang decided to cap off the night at a local chain that does homestyle cooking. Tee Jaye's is a Columbus establishment since the 1970's and the decor hasn't been updated since. Wood paneling lines the walls with old signs nailed to them. The silver wear, wrapped in paper napkins are tossed on to the laminate fake wood tabletops. This is real homespun charm and a place to get eggs at 12:30 am.

Midway through the meal in a nearly empty restaurant, four well dressed people enter. The men are clad in suits and the women in dressy attire, odd as the only other table is filled with a heating and cooling crew getting off of 2nd shift (and yes, they asked about the game too). The mystery would be quickly solved as I spotted On the blazers is the crest for the Univision network. These are obviously on air talent for the game, oddly looking for a late night bite with a table of fans head to toe in red, white and blue seated two tables away.

After several minutes and much confusion, one of the women in the party asks the hostess about the bar. After being told the bad news that there is no alcohol in the place, the server points next door and suggests they can walk to the bar across the parking lot. The weary TV pros head out the door make their way to the exit. The bar? El Dorado. Much like the Spaniards of the old world never found their city of gold, Mexico have never found points in Columbus. 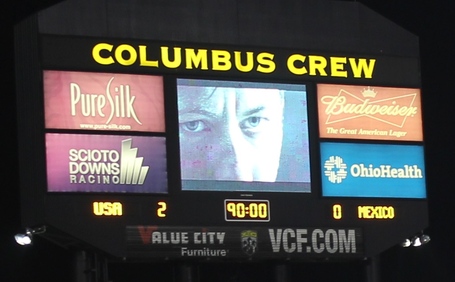