Clinchability: US has 79% Chance of Controlling Own WC '14 Fate in Columbus

The United States stands a good chance of clinching a 2014 World Cup berth at Columbus Crew Stadium on September 10th. How good, exactly? Below, I assess the scenarios that could play out on September 6th and their potential impact on the Yanks' game in Columbus.

Share All sharing options for: Clinchability: US has 79% Chance of Controlling Own WC '14 Fate in Columbus

Silly 27-year old stuff, eh? No biggies. But the one that really tipped it in the net was when I planned my annual buddies trip, Laboration. I was employing some sort of "It's so wrong, it's right!" mindset at the time and advocated for Pittsburgh as our destination instead of our home town Columbus, where a USA-Mexico World Cup Qualifier at Crew Stadium was primed to set the town afire.

So there I was on September 3rd, hanging with a few of my best buddies and scores of Pittsburghian soccer fans at Piper's Pub, watching the USMNT beat Mexico to secure a berth to the 2006 World Cup. Don't get me wrong, it was a blast... but there was plenty of self-punching to go around afterwards when it dawned on us that we had freely chosen to avoid such an awesome experience at Crew Stadium.

Clinchability: A Wish for September 10th

Sometimes life gives you the opportunity to right a wrong. This year, as I've watched the United States' World Cup Qualifiers, I've held on hope that the US' exact moment of qualification would somehow again land in Columbus' lap. As it turns out, that's an entirely likely scenario.

To know exactly how likely, I started digging into which win-loss-tie results from the September 6 cup of CONCACAFfeine would give the United States the power to control their own WC '14 destiny in Columbus. Throughout, the term "clinchability" seemed to resonate. If you guessed that this means "ability to clinch something based solely on the outcome of one's own competition", circle gets the square.

With three games that night and three potential outcomes in each, there was a total of 27 possible scenarios. (If you were told there would be no math, you were lied to. In my columns, there will always be math. Semper Mathematicis.) Here they are: 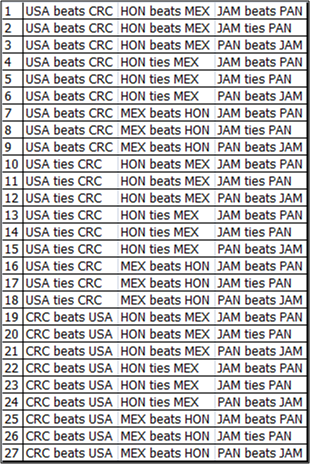 Next, I did the following:

First, from #2 above, my estimates:

There's of course tons of room for debating how likely a win, tie or loss is in any of these matches. As Conan says, "Be cool, my babies!"; in order to get some kind of clinchability figure, I had to take some guesses.

**Editor's Note: Special thanks to Paul Carr (@PCarrESPN), who reminded me that goal differential is the tiebreaker being used. I've never been one to let a little accuracy get in the way of a good story.**

It boiled down to this: the United States has about a 4% chance of clinching in Costa Rica, about a 79% chance of clinchability in Columbus (16% of the scenarios need just a tie, 63% would need a win) and with the last 17% they'll need some help. Again, this is not a prediction of the outcome of the USA-Mexico game itself. What this says, though, is that the US will almost certainly control its own fate when it steps on the field in Columbus.

Here are the eight different scenes that might play out on Friday, September 6th, along with how they would affect the outlook in Ohio:

Even More Clinching in Columbus: A Little Help

There are a few more situations in which the US could clinch a World Cup berth in Columbus based on help from other matches; I'm not going to run them all down here. However, for those of you attending the game, listen closely. If the US needs help to clinch after their game, the other one that will matter is probably going to be the Honduras-Panama game, which starts 54 minutes after USA-Mexico. Hopefully Crew Stadium will be ready to broadcast it on the fuegotron and the in the Upper 90 Club.

There's something mystical about the relationship between Columbus and the USMNT. Whether it's the crazy weather games against rivals, a repeating successful scoreline or just the Midwestern atmosphere of the match, Columbus Crew Stadium has served its country over the past 12 years like no other. September 10, 2013 could easily be another defining moment in that tradition.