Each week, I update the Columbus Crew's playoff outlook based on their results and the those of their MLS Eastern Conference foes. This week the Crew traveled to Real Salt Lake and delivered a limp-fish-handshake performance, losing spectacularly to one of the top teams in the Western Conference.

If you follow me on twitter, you may have seen a couple tweets where I was mentioning that this week's loss doesn't exactly bury the Crew's playoff hopes. (They're already trying to dig themselves out of a grave.) Last week, I said a target record to get into the playoffs over their final 10 games would be 7-1-2. On paper, the toughest of those 10 would have been either at RSL or at Montreal. If you're going to lose 1 remaining game, might as well lose on the road to someone in the West.

The other key factor to the Crew's outlook is how other teams in the East did. Last week, I suggested five teams to root for in "Who Do I Root For This Week?" Your rooting worked big time; the Crew got exactly the help they needed in four out of the five games. That dropped the expected points needed for 5th place from 52 to 50. Last week's needed PPG for the rest of the season was 2.3; this week's, as you'll see below, is virtually unchanged at 2.33.

Here's a view of the projected points for the last playoff spot vs where the Crew have been trending since June 30: 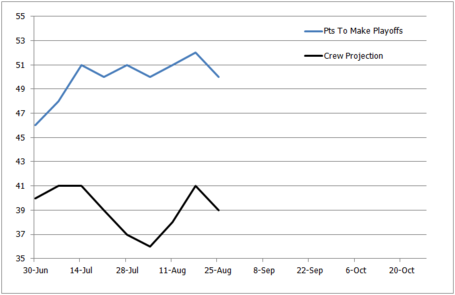 In the East, 3 points separate 2nd place from 7th. Normally at this point in the season, teams separate. This year, the opposite is happening. Below are the standings as of 8/25, sorted by PPG.

If the Crew start another winning streak next week against Seattle, by September 21 (game 30) they can expect to be in playoff position. 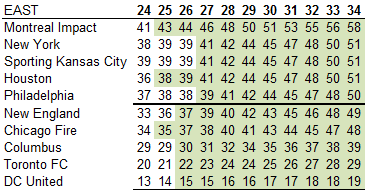 Montreal and Real Salt Lake both reclaimed some distance in their respective conferences, but are very close to each other in the Supporters' Shield race.

Whatever you ate for breakfast last time around, do it again this week.

DC United
They are still the worst team in the league; I will include this statement every week it's true.

With their tie against Toronto, they moved one point closer to not being the worst team in league history. They'll need two points in their last 9 games - an uphill battle for sure, but not impossible.

Toronto FC
Tied the of the worst teams in league history, and that tie actually improved their PPG.