Each week, I update the Columbus Crew's playoff outlook based on their results and the those of their MLS Eastern Conference foes. This week the Crew took care of Toronto FC with a commanding 2-0 win at home.

Of course, it's a very yummy thing for Crew fans that the team has won two games in a row. Wil Trapp and Agustin Viana's emergence has seemed to help stabilize the defense and Higuain's return to goal-scoring prowess in the run of play brings relief. But this year's historically even batch of soccer teams in MLS is making the Crew's return to playoff position an even more difficult task. As I've stated before in this column, my prediction for the needed points for 5th place this year is 51. That's based on historical information and Eyeballin'. This week's calculation shows the 5th place team (Philadelphia Union) projecting at 52 points. Here's a quick view of the action since June 30: 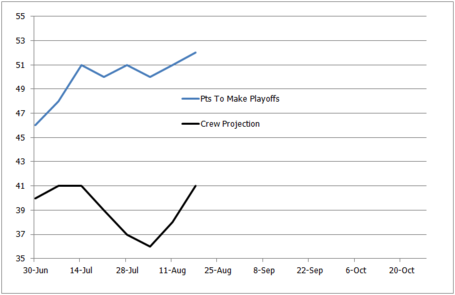 Call out: I'm not waiting on the Sporting KC result tonight; I have to squeeze these columns in when wife and/or baby are asleep. Graham Zusi does not fit into that schedule today.

Note that with TFC off the table, the Crew's ROPPG jumps up to 1.51. This should drop after their RSL match; no other Eastern Conference teams still have to play Salt Lake. ROPPG also shows how New York is better positioned than Philly or Houston in terms of schedule difficulty. Factoring in that Montreal, Sporting KC and Houston all have CCL matches to deal with, I'd expect the New York to make the playoffs this year. This leaves Houston, Philly, New England and Chicago as the Crew's main competition for the last playoff spot. Only one of those teams other than the Crew can make it.

Below are the standings as of 8/17, sorted by PPG.

Here's my breakdown of the Crew's position in the MLS East Playoff race:

Remember: If a number is in white, it's real. If it's green, it's a projection. If you're having trouble reading this, think of each game week as a bowling frame. Sometimes your fellow bowlers' scores aren't displayed right away because they marked in a previous frame. Eventually, you see how you all lined up frame by frame. (Yes, MLS standings are about as obscure as bowling frames. Can we line up the weekly schedules better next year, Soccer Don?)

If the Crew keep winning, by September 14 (game 29) they can expect to be in playoff position.

Disclaimer/Reminder: If SKC wins Sunday night, they pull to the lead in the SS Standings. The top 6 teams are all projecting to finish within 3 points of each other. There's no way it actually ends up that close, right? A quick guide to the figure below:

With CCL upon us, and the Crew winning again, the rooting can get more interesting.

Toronto FC
The losers of Trillium Cup are 3.5 weeks from being eliminated from MLS Playoffs. On pace for 2nd worst record in club history. Have only 13 more days to fire their coach in August, something they've never done. Since the last 2 coaches were fired on the 7th day of the month, moving the head coach firing prediction back a few days to September 7.

A win next week gets them off this list. Next week's match is against an RSL team that has a mid-week away match on turf.