Federico Higuain, Wil Trapp, and Bernardo Anor: "The Beginning of a Beautiful Friendship"

Wil Trapp's emergence as a viable option at defensive midfield puts the final piece in place.

Share All sharing options for: Federico Higuain, Wil Trapp, and Bernardo Anor: "The Beginning of a Beautiful Friendship"

There was something familiar about the side that Robert Warzycha rolled out last Saturday. They played with a determined attacking presence. The defense was tidy and there was a level of self belief evident in this side that hasn't been seen in a couple years. They jumped all over a Red Bulls team missing players and then closed out the game. Then it struck, it was a display reminiscent of the 2008-2010 Crew teams.

Warzycha has tried to recreate this formula and Columbus has been looking to bring in the right parts ever since. Brian Bliss and Warzycha have been looking for a replacement since 2010 and haven't found one. They've brought in foreign talent, but it hasn't been the same. This irreplaceable Massive Champion? Brian Carroll.

Carroll is the least physically imposing soccer player this side of Eddie Gaven, but he possesses an outsized soccer intellect. Injury wore him down to the point where he looked like a shell of his former self in 2010 and the Crew cut ties in a trade to Philadelphia.

Danny O'Rourke, Rich Balchan, Kevin Burns, Dejan Rusmir, Emmanuel Ekpo, Kevan George, Chris Birchall, and Matias Sanchez have all played holding midfield for the Crew since 2011. None have locked down the starting spot. Rookie Wil Trapp has now started five straight games playing much the same style as the departed Carroll and has eased the need to have two screeners.

Trapp is the last piece of the midfield puzzle and the result is that last week's Crew team looks similar to the formation that Sigi Schmid rolled out in 2008. The parallels between Trapp and Carroll are evident. Bernardo Anor is the mobile central midfielder who will help out on defense, but will pop up to threaten the opposition. That's a similar role that Brad Evans capably handled five years ago. Dominic Oduro and Robbie Rogers both are at their best when given room to run and license to attack with Justin Meram mirroring Eddie Gaven's two way role on the other flank. 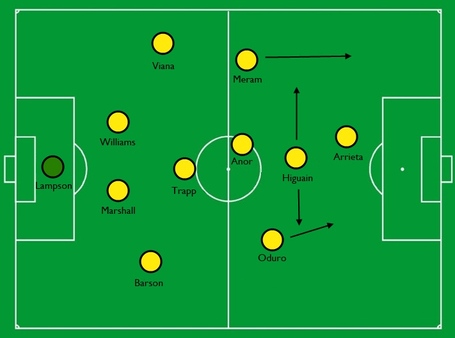 This isn't to say the talent level is the same, but it does serve the same purpose. It provides the best platform to keep the team's Argentine offensive genius in the right place to make plays. Guillermo Barros Schelotto was brilliant at spurring a counterattack, being in the right place at the right time. Federico Higuain is more prone to drifting. This formation allows Higuain to keep his focus going forward.

Lining up the midfield allows Anor to be the link, well, to everywhere. He can take the ball from Trapp and move it side to side or forward to Higuain or Arrieta. No longer does Higuain have to pick up the ball with two capable ball playing midfielders stacked behind him. This alignment fences him in a little bit into the areas where he's most effective.

The second goal highlights the strengths of the alignment. Meram, pinched in, forces a turnover. Higuain plays the quick pass to Anor who pings it to Trapp. Higuain is now in position to turn and run into space rather than being involved in a slower buildup if he were playing more withdrawn. The 2008 team was lethal on the counterattack, something Crew teams of recent vintage have struggled with if the ball hasn't gone through Oduro.

With that last key piece, Trapp, falling into place, the Crew can now play Anor as a higher energy box to box midfielder. Higuain is still free to roam, but doesn't need to pick up the ball from the center backs and build the attack by himself. There is now a spine on this team that can do that.