There has been plenty that has gone wrong this season, but there is one area that has been an improvement... attendance.

Share All sharing options for: One Crew Success of 2013

The front office has been pushing for an increase in season tickets, Goal 10K is the big slogan. New Crew owner Andrew Precourt made it his top priority when he announced he was buying the team. Fans in the seats are what is going to make the Columbus Crew profitable. Precourt announced that the team hasn't reached 7,000 yet, but there is reason to be cautiously optimistic that the team's attendance woes may be behind them.

Through 10 games, the Crew are averaging 15,149 fans per game. That's over a 5% increase from 2012 and it's trending to be the best number since 2007. The figure would be the ninth best in Crew history. That figure doesn't sound impressive, but the the other numbers were buoyed by the novelty of the league and Crew Stadium. Fans are still coming to watch a team that is struggling on the field. 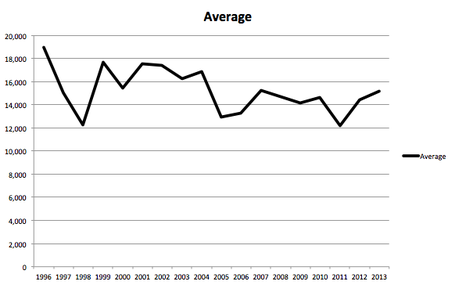 A couple of notes about the averages. There is a significant drop off in 2005, the first year of Mark McCullers tenure as General Manager. A couple sources note that he curtailed the practice of mass distribution of cheap or free tickets and the gate numbers dropped accordingly. There is also a significant drop off in 2011, which coincides with the release of fan favorites Frankie Hejduk and Guillermo Barros Schelotto among others.

Despite changes around the team, the Crew have rebounded well the past couple of year. Last year's bump was a significant 18% increase. Coupled with the gains this year, the Crew are up nearly 25% since the nadir of 2011.

The Crew have used two tactics to build these larger crowds. The season ticket base is bigger than it was. The team recently told Columbus Business First that season ticket packages are up 2,700 this year. 500 of those packages were sold because of the upcoming U.S. v. Mexico qualifier in September. Today, the team sent out a press release highlighting the chance to go to the game with more tickets available to new season ticket holders.

The other method is to try and hook new prospects by using a Crew game as the bait. The MLS and Crew game day experience is consistently rated very high according to internal surveys. Essentially, the vast majority of people have fun at Crew games according to the team research. The sales staff has been extending group sales and setting up events to bring in new faces who wouldn't otherwise consider a soccer game.

Battelle, Cardinal Health, Ohio Health, and other local companies have had the chance to offer tickets to employees at a special group rate. Corporate group sales can easily fill a section.

The Crew's recent 5k Glow Run was another attempt at new fan outreach. This was an event that attracted young and athletic people, a very strong demographic for both the Crew and the league. The event had nearly 2,500 participants at the stadium after hours and signing up for the event came with a ticket to the recent match against the New York Red Bulls.

The team has already had three games with attendance over 19,000 with another three over 15,000. It's group sales that have pushed the numbers higher as the Portland/Flogging Molly Sunday doubleheader is only drew just over 15,000 fans. 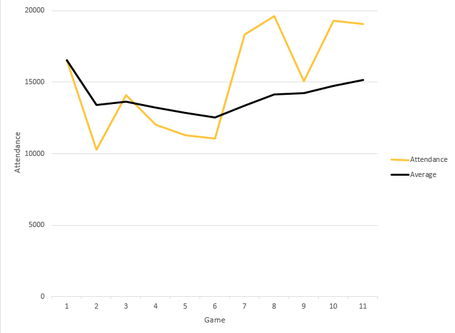 The Columbus Crew have had a strong summer... in the stands.

These single event ideas do help expose the team to new fans, but it's still remains unknown how many actually return to watch a game. The Crew are trusting that the game day experience is the ultimate selling point. With the season ticket base growing and the team approaching sellouts several times this year, there is reason for some optimism.