Each week, I update the Columbus Crew's playoff outlook based on their results and the those of their MLS Eastern Conference foes. This week the Crew beat New York, but still somehow lost pace in the playoff race.

First, the column this week is brought to you by my personal SlumpBuster for Saturday's game, Colombiana & Smirnoff. Colombiana tastes like red pop, and the vodka lost the fight. Way too sweet for my liking. Still, it worked. In fact, going back to the Montreal and Portland matches, my SlumpBustin' this year is 3-for-3. The problem with SlumpBustin is that it requires a slump. If the Crew are going to make the playoffs, no more slumps are allowed.

Other than their own desperately needed, feel-good win, there were lots of bad results for Crew fans this week. The top three teams in the East all lost. Toronto & DC lost. No bueno.

It would be in the Crew's interest if a couple teams would decide to dominate the rest of the Eastern Conference, knocking the middling teams down a bit and giving the Crew an easier shot at catching them. That's the opposite of what happened Saturday. Sporting KC, 4th in the PPG standings coming into the week, leapfrogged all the way to the top of the conference this week, leaving losing-this-week-and-recently-3rd Houston now in the 5th spot.

Last week, the 5th place spot was projecting at 50 points; now it's back to 51. This means the Crew's needed PPG the rest of the season actually went up (from 2.25 last week to 2.27 this week), even after their win. Sigh. Sure, New England lost, but with the Revs on the schedule for the last two games of the season, the Crew only need be within 5 points of them after game 32 in order to be able to jump them by winning both games.

Finally, the Crew continue to have the highest ROPPG (Remaining Opponents' PPG) in the East. This is mainly due to having two successful Western Conference teams, RSL and Seattle, still on their schedule. No other Eastern Conference team still has to play Salt Lake, and only a few others have yet to play the Sounders.

Below are the standings as of 8/10, sorted by PPG.

Here's my breakdown of the Crew's position in the MLS East Playoff race:

Remember: If a number is in white, it's real. If it's green, it's a projection. If you're having trouble reading this, think of each game week as a bowling frame. Sometimes your fellow bowlers' scores aren't displayed right away because they marked in a previous frame. Eventually, you see how you all lined up frame by frame.

This tells us that if the Crew won 6 games in a row they would expect to be in a tie for 5th place. 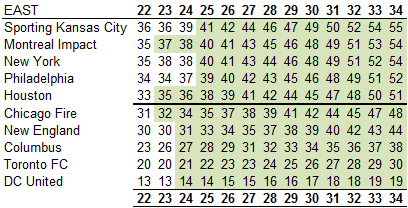 We're 2/3 of the way through the season, and the Supporters Shield/MLS Cup hosting rights race is a bowl of spaghetti. In the two seasons in which MLS has had each team play 34 games, it has taken an average of 67 points to win the Supporters Shield. Right now, it's looking like a mere 56 points will do the trick in 2013. That ish is bananas. Interesting to note that the Western Conference teams all have tougher remaining schedules than their Eastern Conference rivals.

A quick guide to the figure below:

I thought this would be a fun contest, but no one signed up. We'll pick it up next year. Clearly, everyone was too depressed at this season's dumpster fire to want to win free beer from its ashes. Kudos, really...that's good form, Crew fans. War pigs you are not.

Straightforward this week, except for the Chicago-New England game. A tie wouldn't be all bad; only two points would be distributed to teams above the Crew instead of three if there was a winner. However, since the Crew play the Revs two more times and Chicago is farther separated from the Crew than is New England, a Fire loss would be slightly better in my opinion.

DC United - Your US Open Cup Finalists
They are still the worst team in the league; I will include this statement every week it's true. However, their Open Cup run is yet another rock tossed at the Crew's fragile playoff chances.

Coming off a midweek US Open Cup Semi-Final game, DC trotted out their youngest lineup ever against Philly on Saturday. That's right, forever. Foreva-eva. Foreva-eva!? At a time when the Crew need every bit of help from their bottom-feeding rivals, DC's unlikely place in the USOC semi-finals is further conspiring against the Crew. In fact, it's going to happen again. DC's USOC final is on Tuesday, October 1 in Utah. Three days later, they host none other than the Chicago Fire. United will of course throw everything they have at RSL on Tuesday, sacrificing Friday's game against Chicago. If the Crew are still eligible for the playoffs at that point, I promise Crew fans will be hoping for a Fire loss in that game. Unlikely.

All that said, DCU is probably 2 weeks from being eliminated from the playoffs.

Toronto FC
Didn't fire their coach this week, but to paraphrase Curly from City Slickers, "The day week ain't over yet."

With Pipa's snazzy two goals Saturday, hapless Toronto coming to town next week and three of their next four games at home, Crew fans should be allowed to daydream about going on a tear in August. But if they merely pushed their expected playoff elimination day back into October, I'd remove them from this section of the column.