How did the Crew beat Portland, they got weird.

Share All sharing options for: The Columbus Crew's 4-6-0 and Other Things From Their Bag of Tricks

I happened to run into Crew legend Frankie Hejduk on my way into the stadium on Sunday. He was chatting with Crew scribe Steve Sirk, talking about the message of the week: "Let's get weird". He was talking about the backs to the wall nature of the game against Portland and the post game Flogging Molly concert, but it was during his impassioned, stream of consciousness, pep talk of all things Crew that I saw the Crew starting lineups light up on my twitter feed. Apparently Robert Warzycha got the message because he brought out a lineup that gave four players their first start of the year. It also looked like he was switching up formations with a 4-3-3. Weird indeed.

On the field things got weirder. The Crew listed three forwards, but it looked like a simulacrum of the 4-3-3 formation that Portland used, until going down a man. It vaguely looked like the one that Ricardo Irribaren has rolled out for many of the reserve matches in the past two and half years. It looked more like a 4-6-0. Not the Spanish invention of Euro 2012 with two lines of three. It bore a stronger similarity to Luciano Spalletti's 2006-07 AS Roma side with Totti at the tip of the spear.

Federico Higuain was tasked as the central forward. He would drop into space and link up with the other forwards and the midfield. Bernardo Anor was supposed to be the playmaker of the midfield trio and spring into attack. On the wings, Dominic Oduro with a dominant right foot started on the right, but was swapped to the left. Aaron Schoenfeld, the expected option as a target forward was deployed on the near left, but swapped with Oduro by the 15th minute. 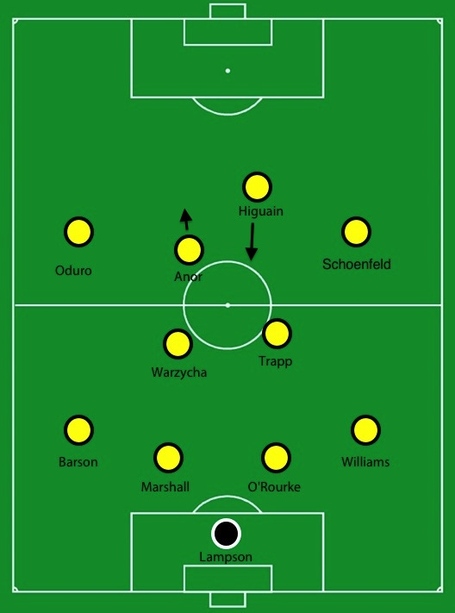 No, it didn't work as drawn up. Higuain dropped into space and linked up well with Anor. Higuain tracked back on defense, but didn't have to work as hard with Anor doing the heavy lifting, getting the ball through midfield. Oduro, on the left, was often stranded without a way to pinch in with the Higuain and Anor in that space. Schoenfeld appeared to be playing as a simple two way winger, a role he was miscast for. He was often late on his pressure and picked up quite a few fouls. The defensive pressure on the midfield was a little soft, conceding possession once they got past the first line of defense. There were only two central midfielder that had to deal with Ben Zemanski, Diego Chara, and Diego Valeri. 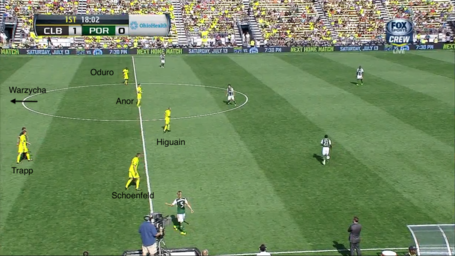 Yes, there are certainly things that worked out of this formation. Swapping Oduro back to the right would have given the Crew a very dangerous weapon with room to work rather than being hemmed in. Schoenfeld has some good qualities, he's very good in the air and a solid distributor as a target forward, but as a two way winger, you get honest effort. That's a little limiting, especially since he's not a threat to cross or cut in. Ben Speas would be a better fit, especially if he commits to a strong defensive effort.

The biggest benefit was seeing Higuain work with both Anor and Wil Trapp. Higuain finally didn't have to carry the load like he has in past games. Anor and Trapp did well to get him the ball in places where he had more than a half step to make his next move. Higuain had six key passes.

Columbus looked best when Trapp had the freedom to get forward. That's when he has been most impressive with the U-20's and now with the Crew. Kevan George afforded him that much more than Konrad Warzycha. There was much more fluidity when Columbus had the ball than in games past. That's attributable to players like Trapp (45/48 passing, 94%), Anor (34/39, 87%), and Higuain (58/70, 83%) playing together. They thrive in tight spaces and still connect under pressure.

After the game, head coach Robert Warzycha seemed relieved to secure the win, but in a way the Crew out-Timbered Portland. Yes, the visitors controlled possession 55.8% to 44.2% over the course of the game. They had 80% pass completion on 421 passes compared to 78% on 345 for Columbus, but where it counted the Crew were ahead. 106 of those 345 Crew passes were in the final third. Portland, 94 of 421.

Yes, Portland controlled the ball, but not after the 60th minute. The stats provided by MLS Golazo app show the Crew holding the ball far more that Portland. The visitors slowly tired with the man disadvantage and Columbus tightened their grip.

Even with the man advantage, Columbus looked like they were chasing, but in the end, with a 1-0 advantage on the scoreboard and holding Portland to one shot on goal and another off the crossbar, it was more like Muhammad Ali's Rope-a-dope. They had the game, they closed it out. I told you it was weird.