Each week, I update the Columbus Crew's playoff outlook based on their results and the those of their MLS Eastern Conference foes. This week saw the Crew lose to the LA Galaxy and beat the Portland Timbers.

Playoffs
If the Crew are to make the playoffs in 2013, they'll need to continue beating good teams like they did today against Portland. With upcoming matches against New England at home and Toronto on the road, four to six more points in July would go a long ways towards getting back in the top five spots in the East.

Currently, the 5th playoff spot's simple projection is at 48 points. I will always post the simple projection in this section, which takes the 5th place team's PPG and multiplies by 34. However, as more teams in the East start playing each other, my hunch is that the number will reach 51.

ROPPG
As the season progresses, the difficulty of each team' remaining schedule gets more and more important. I wanted to track this, so I created a stat: ROPPG (pronounced "ROP - gee"). It stands for Remaining Opponents' Points Per Game, and should be increasingly reliable to determine how tough the rest of a team's schedule is. Unfortunately for the Crew, they have the highest ROPPG in the East. Fortunately for the Crew, they have Wil Trapp. (Where have you been all my life, WT?!) 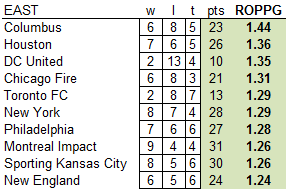 Who Do I Root For This Week?
Yesterday was bad, with both Houston and New England winning. Today went much better, with Chicago losing right before the Crew kicked off on a sunny Sunday afternoon. With the Crew off from MLS play next weekend, you can fully focus your positive vibes towards the following teams in the "Root For" column.

Schadenfreude Zentral
DC plays later tonight; I'll update this section after their match vs Colorado is complete. They are still the worst team in the league. Toronto is once again going to miss the MLS Playoffs, as is tradition.

Fun Fact: Toronto FC has never once fired their coach in July or August.