If you follow the Crew, you're probably frustrated with their results and confused about where they actually stand. This perspective may help.

Share All sharing options for: True East - Figuring Out Where the Columbus Crew Stand in the MLS Eastern Conference

One could argue that the Crew’s "Best Case" scenario should include Houston losing, as that would keep the Crew only three points out of fifth place. I happen to think it would be better if Houston & Philly tie, as only two points would be distributed to teams above the Crew in the table instead of three. Either way, saying that you’re only three points out of fifth place is equivocating when teams have games in hand on you, like Chicago and New England do on the Crew.

But can you really blame the Crew FO for using a positive spin? Whether they’re touting a "non-losing" streak or the team’s close proximity to second place, qualified hope has sprung eternal this year from One Black and Gold Blvd. With the way in which the MLS season is scheduled, confusing situations with regards to standings are inevitable. Be it to maximize TV ratings, minimize burdensome travel schedules or other strategic reasons, all MLS teams experience wild fits of scheduling. It is not uncommon for discrepancies of three or four matches played to exist between teams in the same conference, which deflates the value of standings and the playoff chase. Fans and squads alike are left staring at Points Per Game (PPG) as their compass; an abstract figure that is calculated to the hundredths place. (Sigh.)

Using PPG as a guide, let’s return to the Eastern Conference. With about half the season complete, Montreal’s sales team is about to start hawking playoff tickets. (Stade Olympique has to be in play for MLS Cup, right? December 7 in Montreal sounds frigid.) The Impact’s 1.88 PPG leads MLS and makes them far and away the class of the East. Following Montreal is a glut of six teams with mediocre records in positions two through seven; the corresponding PPGs are 1.50 to 1.31. Projected to the end of the season, none of these teams’ records would have been good enough to even make the Eastern Conference Playoffs in 2012. In 2013, however, 1.35 PPG (46 points) is projected to do the trick. The Crew’s PPG has dropped from 1.33 to 1.11 over their recent three-game skid, but they are still within striking range of the pack. For instance, a quick two-game win streak would jump them back up to 1.30 PPG.

This brings us to bottom feeders Toronto FC and DC United, with PPG of 0.76 and 0.50, respectively. While Toronto has shown signs of life earning six points in their last five matches, new coach Ryan Nelsen’s PPG after 17 games is the worst in team history. DC United is faring even worse than Toronto, owning the worst record in the league. If we take a quick peek out west, we see Chivas USA with the same PPG as Toronto, .76. These three teams are so far behind the rest of the league, I thought it might be worthwhile to consider what the Eastern Conference standings would look like if each team chalked up all remaining games against any of these three as wins. No coach would encourage this, but as a fan it will offer all a certain view into the strength of schedule that each potential playoff team faces over the next four months. So, please suspend reality for a moment and imagine that every team in the league just played all their Chivas, TFC and DCU games and won them all. You can also imagine Toronto, DC and Chivas tying each other if you’d like. Done? Ok, let’s take a look at the updated standings, now sorted by PPG: 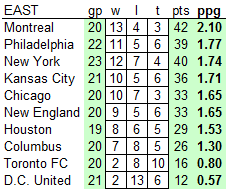 With only two matches remaining against the three struggling teams, Houston and Columbus will have a tougher schedule to overcome than their Eastern Conference foes. Sporting Kansas City will have three such matches, and the remaining five teams vying for playoffs have four.

For the Crew, the message is twofold: