Each week, I update the Columbus Crew's playoff outlook based on their results and the those of their MLS Eastern Conference foes. This week the Crew scored 1st, then completely blew it against their rival.

Here are the standings as of 7/28, sorted by PPG. In a must-win-but-absolutely-must-not-lose game, The Crew blew a late lead and demoted any hope of making the playoffs this year into 'anomaly' category. If you were a Project Manager in charge of this project, you'd have to ask for more time, money or resources; probably both time and money. The Crew have neither.

*Toronto FC has never made the MLS Playoffs.

Here's my breakdown of the Crew's bleak position in the race:

I use this as a way to predict what a team's record will be at a given point in the season. For instance, this is the first step I take when figuring out how soon DC and Toronto (and sadly, now, the Crew) will be eliminated from the playoffs.

Remember, if a number is in white, it's real. If it's green, it's a projection. 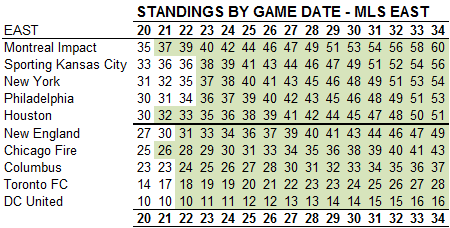 So you've been reading this article, thinking to yourself, "Man, this guy is only somewhat right. If only he was completely correct, like myself." You want a shot at the title? Between now and August 2, send your predictions for:

Those who correctly predict either category will be mentioned... nay, PRAISED in my season wrap-up article in late October. An overall winner will be awarded the following fancy prizes:

Send your picks to me via Twitter @4castnate or email (natebeckman@gmail.com). 1 pick per person, must be present at Hendoc's to drink victory beverage. Void where prohibited. Must be 18 or older to win. Must be 21 or over to consume booze at Hendoc's. No, Massive Report will not buy you booze if you're underage; you'll get a Diet Coke or something. I'll make up a tiebreaker in October if it is needed.

For the record, I've already published my predictions for the season in previous blog articles:

Sigh... Do I even need to keep including this section?

DC United - Historically Bad, Getting Worse
They are still the worst team in the league; I will include this statement every week it's true. As I indicated last week, DCU could make a run at being the worst team in MLS history. Their current PPG of .48 is basically even with that of current "title" holders, the 1999 Metrostars, who gained 15 points in 32 matches for a .47 PPG. If DC is going to avoid the all-time worst record, they'll need 6 points in their final 13 games. With two against Toronto and one vs. Chivas USA, you'd think they'll scrounge up 6 points.

Toronto FC
I won't rip the team this week, as they showed resolve in getting two late goals against the Crew. It looks like Ryan Nelsen will not be the first TFC coach fired in July; he still has a shot of being the first one fired in August.

Columbus Crew
The Crew are now on track to be eliminated at home vs Chicago on 9/21. Chris Rolfe is probably going to score 4 goals in that match, then burn down the Santa Maria.