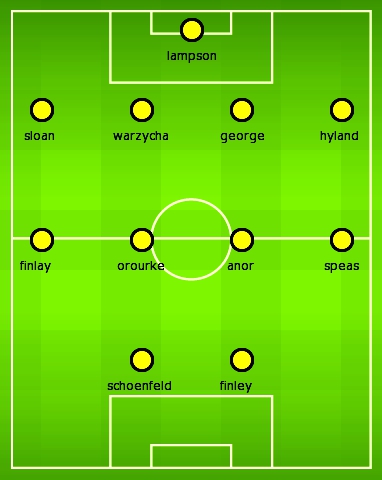 • Had never seen Boswell in this type game environment before (quiet). Liked how he barked orders from the back when the ball was with Dynamo players in the attacking half.

• Shawn Sloan was the surprise player of the match for me. He started at RB and moved to a holding mid type role. He is coming off as an intelligent player and his effort today was outstanding. Among many things was able to draw a yellow on a Dynamo player (Mike Chabala) and at the same time draw the ire of one Dominic Kinnear, who was sitting in the stands not far away.

• Danny O'Rourke moved well in the first half he played (unclear if he is carrying something or not).

• It was an absolute joy to watch Ben Speas and Bernardo Anor in the middle of the field today. Those two, with Ethan Finlay playing out wide right, made the first 35-40 minutes of the game the most fun I've had watching the team this year.

• MORE JOY: Every once in a blue moon I get to see Anor running free in the middle. Today was one of those days. His play off O'Rourke and Speas was joyful Crew goodness.

• Schoenfeld seemed to be the beneficiary of most of the positive midfield play. He, like most of the rest of the Crew, cannot find a way into the back of the net. Aaron is much improved over last year and is able to find the right spots to get attempts on goal.

• Houston’s Tyler Deric had a great day in goal but the overall finishing, while on frame, not creative enough.

• Columbus probably deserved a goal in the first half but given the way things have been going in that department a 1:0 final suits the match.

• Crew were playing a much more experienced lineup than Houston (save for Bobby Boswell). By the second half, the Crew subbed in a host of Academy players though.

90 Konrad Warzycha : Nothing to note

Really fun game to watch today but ultimately poor finishing kept them from winning the match.