US OPEN CUP 3rd Round Preview, Columbus vs Dayton

All sixteen domestic Major League Soccer teams join the US Open Cup May 28th and 29th. The Columbus Crew find themselves facing off against the Dayton Dutch Lions for the second year in a row. Below is a preview of that match and a look at the other matches in the third round of this, the 100th anniversary of the tournament.

Share All sharing options for: US OPEN CUP 3rd Round Preview, Columbus vs Dayton

After reaching the US Open Cup Final in 2010 the Columbus Crew have been eliminated in the first round of which they participated over the past two years.

Richmond Kickers’ target man Matthew Delicâte put away a game winner in the 85th minute that lead to a 2:1 victory for them. Richmond were able to match Columbus most of the match.

The Crew were the only MLS team to lose in the third round of the tournament in 2011.

Last year saw a major format changes to the tournament in that all 16 US based MLS clubs participated. The third round remained the point that MLS clubs entered but venues were now blind draws. Even though Columbus were able to host the opponent in the Dayton Dutch Lions, they lost 1:2 off a couple late goals from sloppy defending.

The Crew weren’t the only MLS club to fall in the 3rd round last year, though. All totaled, MLS teams went 8 - 8 in the round which turned a lot of heads.

Columbus is getting a second crack at the Dayton Dutch Lions after being embarrassed the year before and it does appear the Crew are going to take it more seriously. Shortly after the fixture was announced, word came down that the Crew requested it changed to a day later.

To get to this point in the tournament the Lions have had to beat two clubs. In the first round the handled USL PDL side in the River City Rovers by a scoreline of 0:3. You can read more about that HERE.

The second round saw the Lions struggle with amateur USASA division Deerborn Stars. It took added extra time and three red cards to get the win but Dayton pulled it off. Crazy game, read more HERE. 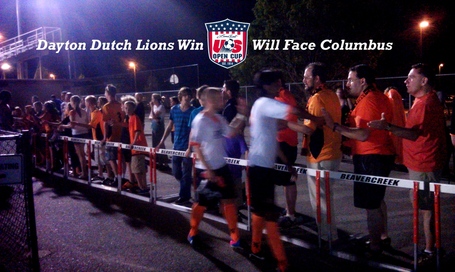 Over the past two years the Crew are the only MLS club to be eliminated in the first round of which MLS clubs enter. A loss for a third year in a row would be a disaster.

Dayton likes to play a loose looking 4-3-3 that seems to morph into a top heavy (3-4-3) attack by pushing up outside wings and two of the three interchanging midfielders. With the loaded middle they tend to hang three in up top at all times. You will not find them drifting back on defense very often.

Major League Soccer is a very aggressive, defensive first league and USL Pro’s Dayton runs a bit counter to that. Their tactical setup could give the Columbus Crew mid-field some problems were the Lions to hold to it - but stands to reason they may change this tactical formation and tendencies because of talent discrepancies and play it more safe.

Dayton has a few good players to look out for:

Controlling things in the central MF of the pitch and responsible for linking play up to the three attacking players are Joel DeLass and Irakli Khutsidze. These two are the engine that makes it go. Outside of them you will see Shintaro Harada in there as well.

Up top keep on Gibson Bardsley. Look to him to possibly put one past Crew GK Matt Lampson. The Crew might also see a good player in Brandon Swartzendruber, Tjeerd Westdijk and Joseph Madigan.

Dayton will most certainly be up for this game as they were last year when they shocked the Crew. But do they have what it takes to vanquish a middle of the road MLS club? Be sure to check it out.

What to Watch For: US Open Cup

2012 was a historic year for the modern Open Cup because of the fact that 8 of the 16 MLS teams to enter were knocked out the first round of which they played. 4 of the losses came at MLS venues and 4 away.

This year should be just as exciting.

Somewhat mysteriously, the US Soccer took this game away from Ocean City, where it was originally scheduled, and put it in Philly. There should be a large contingent of Nor’easters’ fans in Chester to pull them on.

Look for the Kickers to put up a good fight but because of the new MLS relationship with USL Pro this is more of a big brother little brother matchup now. Year’s past it these two were pretty fierce enemies.

If there is one team the casual MLS fan might recognize, it is Orlando City SC. Their grassroots bid to become the 20th MLS franchise failed so they will be looking to take down one or two this year during this tournament. They are a team loaded with MLS level players. This one will be good if City can keep their composure.

Fox Soccer studio host and legendary US Men’s National Team player, Eric Wynalda is also the part-time coach of the Silverbacks. For those that remember back to last year, Wynalda took a ammateur side called Cal FC past the Portland Timbers in US Open play.

This game will be streamed on USL Pro’s UNATION service. Watch this game for the beauty of Blackbaud Stadium. In my opinion? Charleston is the team I would have liked most to be the 20th club in MLS. Was able to watch the Battery take on Dayton a few weeks ago... I fully expect Irishman, Colin Falvey and company to give the ‘Quakes fits.

Columbus is going to come out with everything they’ve got this year. Should be a great one. Go watch this game already.

Charlotte has a name that Crew fans will remember in Shaun Francis. Shaun has been playing well for the Eagles. Keep an eye on this result. Chicago will be pressing but might find a side that will not be easy to take down.

LA lost this fixture last year to this same inspired Railhawks side at WakeMed. Look for former Crew starter Mr. Julius James playing in the back line. Also, Robbie Rogers will likely feature in this match. So, give it a watch if you are in the Raleigh-Durham area. No excuses. Know who might be there watching right beside you? Will Hesmer.

This one should be interesting. I don’t expect a Rowdies win but wouldn’t be suprise if there is an upset here. Brutal travel for Seattle. Saw the Rowdies earlier this year. Not impressive but they do have a great player in Englishman, Luke Mulholland.