Using the all the dark arts and internet research at our disposal, Massive Report tries to divine Robert Warzycha's depth chart.

I don't have a hotline to Crew Head Coach Robert Warzycha, so this is a best guess effort at how he sees his team. Going three deep at every spot in his preferred 4-2-3-1, 23 of the 30 players make the chart. Some spots are set. Andy Gruenebaum starts and Matt Lampson is the understudy. Other spots are educated guesswork such as Domini Oduro moving to forward, Tyson Wahl losing his starting spot (once Agustin Viana is back), and Matias Sanchez locking down the holding midfield role.

If everyone was healthy I'd expect the following from Warzycha. Gruenebaum starts in front of Viana, Glauber, Chad Marshall, and Josh Williams. Sanchez acts as the defensive midfielder while Danny O'Rourke screens slightly ahead of him. Eddie Gaven moves back to the right and Ben Speas starts on the left. Federico Higuain does whatever he wants just behind Oduro.

The subs bench likely has Matt Lampson, Tyson Wahl, Chad Barson, Tony Tchani, Konrad Warzycha, Ethan Finlay, and Jairo Arrieta ready to step in when called upon. There is a chance that Arrieta grabs his starting spot back after returning from suspension or that Wahl has shown enough to hold down the left back spot, but as is stands this is the best idea of how Warzycha sees his team.

Of course he could always see something in practice and suddenly it's Ryan Finley or Bernardo Anor shooting up the charts and this is all null and void. Enjoy and debate in the comments below. 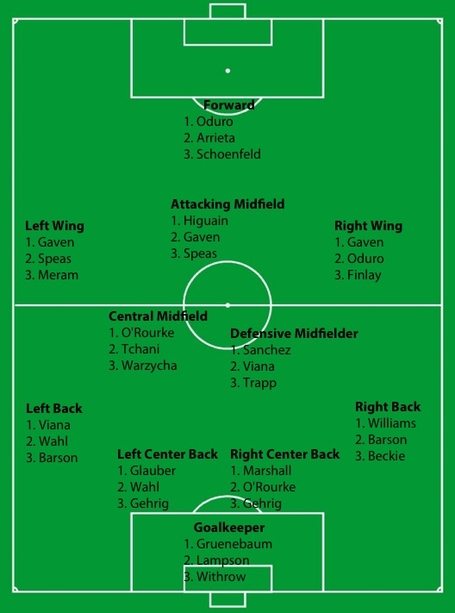