The middle third of the MLS season is upon us and Jay Heaps' New England Revolution look to overtake Robert Warzycha's Columbus Crew and John Hackworth's Philadelphia Union for the 5th and final Playoff Spot. Here's how that might happen.

.WHERE THE CREW ARE.

The Columbus Crew are 12th in Goals For per Game (GFpGM) and tied 4th in Goals Against per Game (GApGM) through the start of this year. Here is figure that shows league position for both GF and GA. 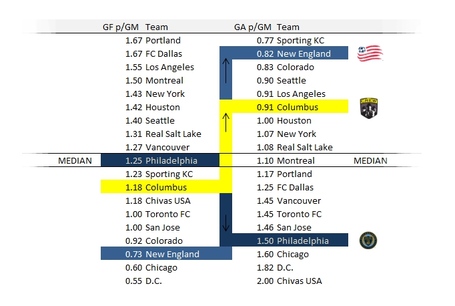 Highlighted are the teams that are currently (and expectantly) in the Eastern Conference Playoff race for the fifth and final spot. For a league like Major League Soccer Goals Against should carry more importance than Goals For, particularly this year as total goals are down.

On Offense. Over the past two years no team averaging less than 1.25 GFpGM has made the playoffs. That puts the Crew (1.18) and Revs (0.73) out of the picture unless they improve goal scoring potency.

That doesn’t mean they have to over correct. High powered clubs like 2011 NY Red Bulls (1.47 GFpGM) and DC United (1.44) missed the playoffs though, so as mentioned it can be argued that the stronger indicator of playoff contention is Goals Against.

On Defense. To drive home the point of placing a priority on a strong defense; 15 of the top 16 teams in average Goals Against over the past two years have made the playoffs. A defensive minded foundation is especially important when pushing through tight matches later in the year. 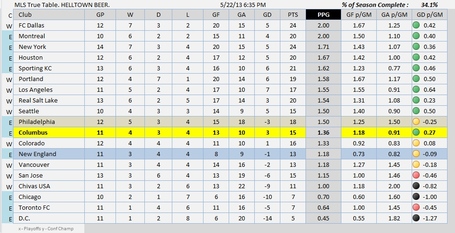 Philadelphia’s 1.50 GA average needs to improve in order for them to maintain their 5th spot in the East. As it stands right now, both Columbus and New England will pass them.

Here is a list of top defensive teams in past two years:

What’s interesting is that for as much as Crew fans are under the impression that Columbus is a defensive focused team, they fall right in the middle of all teams in the 2011-12 seasons. Or as some might say; mind-numbingly average.

Highlighted is the 2011 Union side that finished 8th on the league table that year. The 2013 Robert Warzycha Crew are shaping up to be very similar to that Piotr Nowak coached side. Below is a side by side comparison of team results.

.HOW THE CREW GOT HERE.

As the first third of the MLS season has passed by the Columbus Crew have found themselves playing a soft schedule. The average opponent rank has been 13th on the combined table and the median has been 15th.

Only three of the Crew’s first 11 have been against opponents ranked higher than them on the combined table and their record wasn’t at all positive.

.THE NEXT ELEVEN GAMES.

As summer approaches Major League Soccer clubs enter into the "meat" of their schedules. This part of the season can be hard enough with high temperatures, mounting injuries and international friendlies but it’s doubly hard for the Crew because of the way things have shaken down in their schedule.

If you apply the Crew’s Points Earned per Game of 1.63 vs. below them on the table and 0.67 vs. above then we see the club going through a very real rough patch.

New England looks to be the team benefiting most from the upcoming schedule. In fact, if you look back at their first eleven games you’ll see that 10 have been played against a team ranked above the Crew in the standings (11th).

Games v. Teams Ranked 11th or Above in First 11 matches

...and here’s how well each team did against teams ranked above 11th:

What this means is that New England has had the most difficult schedule to date yet has the best record against good teams. Their next set of eleven matches see’s them play only two teams currently above the Crew in the table (LA and Houston).

Philly, on the other hand, is facing six teams above the Crew right now.

This is a long way to say that the Crew record is inflated due to strength of schedule (easy). Had they faced the schedule New England has, the story on this year would be vastly different (as in Chicagoland type record).

The degree of difficulty on this second third of the season dramatically increases for the Crew. By my estimation the Crew will finish the first 22 games of the season with 25 points, or a 1.15 Pts per Game rate.

This will likely put the Crew in a fight for 6th in the East with Philadelphia with Chicago nipping at their toes while New England (yes, New England) surges past both Columbus and Philly for the final playoff spot position.

Going to make for a fantastic third, third.