Share All sharing options for: Fire Delays Start of Game 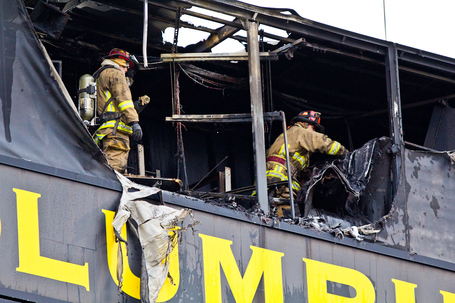 Tonight's game has been delayed due to a fire in the south end scoreboard. The fire broke out in the upper section of the scoreboard at 7:11 pm, just under 20 minutes before the Crew and D.C. United were due to kick off.

Crew staffers and stadium security quickly cleared out the south stands and the Columbus Fire Department arrived within 10 minutes to begin getting the flames under control. The fire was extinguished at 7:47 pm and the players returned to the field at 7:53 pm.

There were no injuries and the Columbus Fire Department has cleared the stadium to play the game tonight. The game is scheduled to start at 8:23.