The Crew are Close To Landing Another Major Concert Event

The Crew are close to adding a fourth c to the 2013 schedule today. After confirming with sources, Columbus will be home a weekend long show beginning on September 29th. The lineup will be headlined by fan favorites Toto.

The Crew have secured three high profile concerts during the 2013 season. Rock on the Range is taking up their usual mid May weekend spot with shows going on from the 17th through the 19th. Kenny Chesney performs his No Shoes Nation Tour on June 29th. Flogging Molly following the Columbus Crew v. Portland Game on July, 7th. Crew Stadium has traditionally hosted the curtain closer for the Ohio State Fair, scheduled to run from July 24th through August 4th.

The Crew are away to F.C. Dallas when during the scheduled concert. The team has also gotten it in before the All American Quarterhorse Congress takes over the fairgrounds for most of the month of October on 4th. The concert deal is also dependent on

The full lineup will be confirmed closer to showtime, but will be a collection of the really smooth music of that dominated the airwaves from 1976 to 1984. Michael McDonald is expected to reunited with the Doobie Brother, with Hall & Oats, Kenny Loggins, Steely Dan, and more on the bill.

EDIT: We've gotten an early promo and have updated the story below: 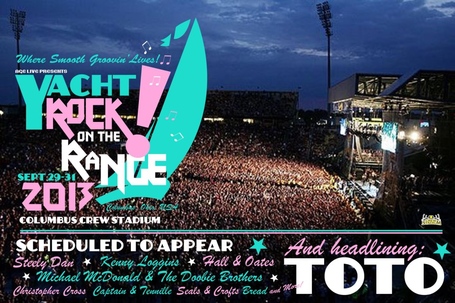