Eastern Conference Round Up

Results, news and notables from MLS Opening Weekend with focus on the Eastern Conference.

Share All sharing options for: Eastern Conference Round Up

1. SPORTING START
Sporting KC got their hardware seeking campaign off to a positive start by beating the Philadelphia Union 3:1 at PPL Park. The Union started the game out really well in front of their home crowd but the better team eventually took the match over.

Columbus should be able to handle this Union club home (April 6th) and away (June 5). No 3rd match against them this year, which is unlucky. The Crew do face KC three times, though. All during the back half of the year.

2. SEVEN THOUSAND
Or is it four thousand that bothered to show up to watch Chivas USA lose to the Crew at the Home Depot Center on Saturday. Columbus looked the more coherent team overall but a couple missed chances get converted... This was a 1:0 or 1:1 game but as it played out Chivas got too greedy in the last two minutes. Both Josh Williams and Dominic Oduro each put on a show of tremendous skill and athleticism. 3:0 was the final.

Unofficially, this is the lowest attended opening game in Major League Soccer history. Officially, it is the 2nd lowest attended match since early last year. The question that pops up because of this is; Will MLS see an overall dip in attendance for the first time since 2001-2002 this year?

Reminder: No expansion team this year driving aggregate gate up. A league drop in ticket sales has the potential of become a much larger story as the year goes on. Last years total ticket sales? ~ 6.1 million.

3. MONTREAL OVER SEATTLE
Hard enough going into another club’s home and taking home a point but to go in to CenturyLink Field on Opening Weekend and snatch all three? Special. Montreal is picked by most to finish up just above Toronto FC, the Union and New England but just below challenging for the playoffs.

It is possible that Seattle might not be as strong this year but the Impact getting the win will make mid-table playoff contenders nervous. If they are good then the Eastern Conf is going to get wild by year end.

4. CHICAGO GETS STOMPED
LA sent notice to the rest of the league by beating Chicago 4:0 on Sunday, no slow start this year. The Fire are not this bad but this one has to hurt.

4a. The Galaxy’s Mike Magee won MLS Player of the Week. Here is how the voting looked:

5. SHORT STRAW FORTRESSES
Both DC United and NY Red Bulls drew the short straws on opening weekend by having to play in Houston and in Portland. Both are incredibly difficult places to play. Houston might cool down as the weather heats up though. Portland will be mental all year.

DC played it messy -as they tend to do- and went down 2:0. Elsewhere, NY pulled ahead 3:1 but Portland, spurred by their support, drew the match even 3:3. 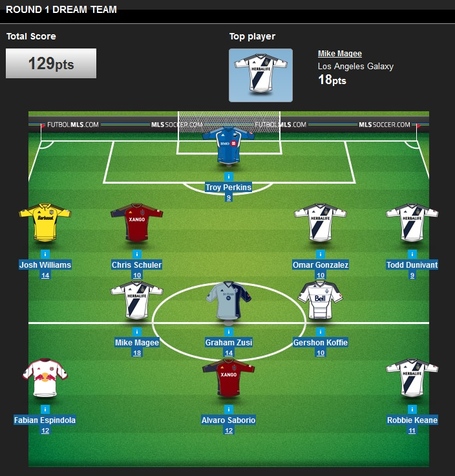 For more on this visit Helltown Beer.