Eastern Conference Round (3) Up

Results, news and notables from MLS Round two with focus on the Eastern Conference through the kaleidoscope of Crew.

Share All sharing options for: Eastern Conference Round (3) Up

Another week in the books and the Crew are 1-1-1. Here is a look at interesting happenings during Major League Soccer Eastern Conference Round 3 weekend.

One of the more impressive events of the weekend was Chicago’s willingness to stand ground and stop the proverbial bleeding that started minute one of the 2013 season. A club has to have a certain level of maturity and understanding to do what Chicago did.

It might not be the sexy that the league wants but it is the homely good looks the league absolutely needs to gain respect around the world.

Final Result? Against a strong Sporting KC side the Fire grabbed their first point of the year 0:0 and may have saved half the season.

The Columbus Crew drew at home against a injury weakened San Jose club. The result was greeted with mixed reaction. Some expected more while others were okay with a point. One thing both camps will agree on is that the Crew need a good result away in DC this weekend or it’s down the pundit ladder the team fall and the momentum heading into the season is halted; Abruptly, suddenly and with damage.

Sporting Kansas City, the Philadelphia Union, DC United and the New England Revolution are starting to dip their toes into the USL Pro / MLS partnership. Sporting and DC have already started things off by sending four players each to their USL counterparts (Orlando City and Richmond Kickers).

No guarantees on how well this will work out from a business perspective but it should give these Eastern Conf clubs more depth through more games. Please check Nicholas Murray’s latest on USL’s site for more information. Among other key insights he mentions that it exposes a lot of other quality players to Major League Soccer scouts.

NBC Sports made a big deal out of last weekend’s "Rivalry Week" by keeping MLS on almost all afternoon and evening. Complete with a "Breakaway" show similar to that of NFL’s "Redzone". It was an ambitious event to say the least as Major League Soccer doesn’t even have a regular highlight show yet or much exposure outside their reach in the independent market. Everything sort of just comes in bits and pieces on their site.

They won again beating Toronto. Maximum points to start the year and they look like a real solid team. So much talk of this club that off air during last night’s Massive Report Podcast Massive City FFC and Helltown Beer discussed creating a guerrilla Impact de Montreal podcast, one obscure enough that only the most hardcore Impact fans would find it. Jokingly, of course ...

NASR PLAYER OF THE WEEK!

Here’s who the North American Soccer Reporters chose this week:

Add up all the points awarded to players in MLS Fantasy Soccer thingy and the Crew lead the pack?

Interesting. Looking it over the rules it seems to be heavily weighted towards Defenders (not too terribly different from the official BPL fantasy league) and any of those that score a goal are going to be tops (Josh Williams, Glauber). Crew leader is Federico Higuain (21 pts, 4th overall), Josh Williams, Chad Marshall and Glauber are in top 20 as well.

Anyway, the scoring rules are wonky and the way they price players is an amusing; a $100 million salary cap with all players being valued between $3.9 (Eric Gehrig, boo) and $10.5 million (Robbie Keane). Median is $5.5 mil. 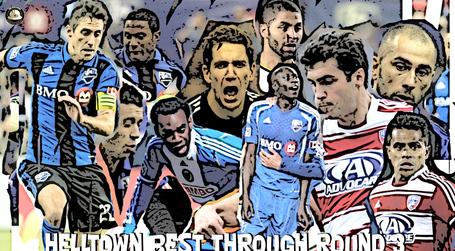 Here’s my league best through the first three weeks. To be on the team you need to have played at least 3 games. 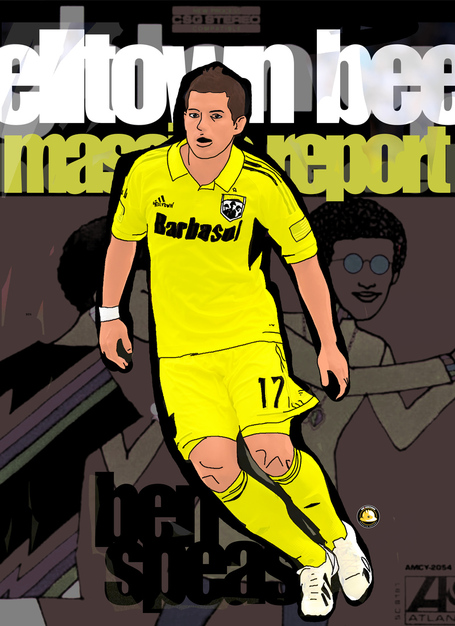