Below is how Major League Soccer’s Eastern Conference might finish up.

One interesting way to get a feel for where teams might wind up at the end of the season is to gather up as many predictions as you can, put them together, and see what comes out the other side.

After performing this exercise over the past couple years it seems to be impressively reliable. Some call it ‘the wisdom of the crowd’ or ‘crowd theory’. No matter what you call it smart money knows that Vegas relies on it to come up with odds.

What most have found is that you only need about 20 or so predictions from a diverse group to get a general idea of where a team is going to fall on the final table.

For this exercise 27 different predictions were used from different corners of the web. 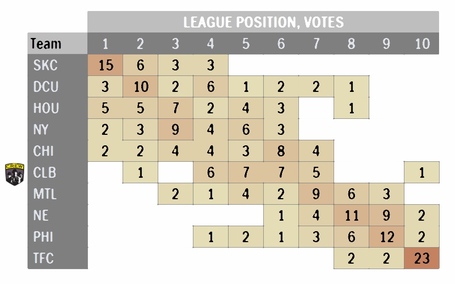 Next up is aggregate number of votes 1 through 5. I like this one. Reason being is that a top 5 finish qualifies a team for the playoffs. Most teams realize (or have realized) that a Supporters’ Shield is way out of reach. This, in turn, means that exact table position matters only to history and very little to individual clubs year to year.

So for most just making the playoffs is the goal and try to make a run in the playoffs once in. Of note: Dominic Kinnear has mastered this method.

Based on the sample of Eastern Conference Rankings pulled - here are the % chance each team has of making it to the playoffs. First up are the most likely...

The above four are your likely playoff teams, which means there is only one spot to play for to get into the playoffs.

It was a little surprising to me to see Chicago clumped up with Columbus and Montreal this year. The Fire have a lot of MLS talent on their team this year but the crowd has spoken.

Do the Crew have enough to break through and get in the playoffs?

This question is a far cry from the MLS Cup expectations emanating from the Columbus Crew camp.

This final group will likely not make the playoffs. It’s amusing that the Philadelphia Union got a few votes because when I saw them a few days ago they looked completely out of sync with little hope. More so than Toronto.

Regardless. I’m not going to argue with this bottom group. So sayeth the crowd.

Similar stories are told when looking at average rank. It appears the Columbus Crew are looking at another year toiling their craft in the middle of the table, challenging for that last playoff spot.

-------
Lots of good places to check out for 2013 predictions. A Must: Check out Oregon Live. Kip Kesgard put together a comprehensive look to the upcoming season. Probably the best out there. Another one I liked this year was “du Nord”.

Bookmark is at SB Nation sister site Black and Red United. They are directly engaged in the wisdom of the crowd by including a poll (95 respondents, easily enough to draw conclusions).