Columbus was roaring through the preseason until their final couple matches against Orlando City and Montreal. Now a few lingering red flags that seem to dog Robert Warzycha teams over the years are coming back into the light. Here’s a final look at the Columbus Crew preseason to guide us through the start of 2013.

The chosen starting XI for the Crew just can't seem to score. If you remove the game against USL Pro side Orlando City the Crew "first team" only scored one goal all preseason that wasn't a penalty kick*. That goal? A Glauber Berti header off a pretty Federico Higuain corner.

All totaled the Crew managed to field starting caliber players 3548 total minutes this offseason against MLS talent. That equates to 3.5 - 90 minute matches. Not the largest sample size but certainly enough to spot an issue.

One goal off a corner, nothing during the run of play and two PKs during the preseason wouldn't be so much a red flag had 2nd team players not put up 5 goals during 2.5 - 90 minute games (2540 total mins).

Outside of the actual result there was a notable lineup tweak during the game that was greeted with raised eyebrow; Danny O'Rourke over Matias Sanchez. With the score tied 0:0 at half Sanchez did come on along with Tony Tchani as defensive midfielders. Ten minutes later Justin Mapp scored the winning goal.

There was a telling moment late in the match when a sprinting full tilt 5'8" Sanchez literally bounced off a stationary Alessandro Nesta.

The change to start O'Rourke suggests that the Crew aren't sold on Sanchez. The opportunity was not lost on O'Rourke as he seemed to recognize the open window by playing one of the more active games for him in recent memory.

Here is how things finished:

It will likely play out that the Crew were in the much weaker of the two groups for this tournament as both the Union and Toronto are looking at long seasons.

I watched nearly every one of the 12 group play games online and traveled down to Orlando to watch the final slate of four games with the groups battled each other. Here is how I would rank the teams in terms of performances during this tournament.

1. Montreal Impact
They handled SKC in the first game, destroyed a bad Rowdies club and controlled DC till the very end (DC didn't score the 85th when it was 2nd team time). In the final they dominated the Crew from about the 15th minute on. It was a proper 1:0 Serie A scoreline.

2. Sporting KC
Sporting was frustratingly good during this tournament. After looking rusty in the first match against Montreal (1:2) they went on to handle the rest of their opponents with ease. 2:0 over DC, 1:0 over Tampa mid-week and 1:0 over Toronto on the final day.

3. DC United
Inconsistent, but proved that their starters can score. They are no where near SKC right now and the 2:0 scoreline proved that but they looked better than the Crew.

4. Columbus Crew
The Crew's standout game was the Wednesday game against Philly. Unfortunately, it was the 2nd team that did all the damage during the 4:0 beat down. Ryan Finley, Ethan Finlay (x2) and Schoenfeld scored goals during this afternoon blowout. Most of the starters came on after the 60th minute and didn't get anything. If you take out this 2nd team win the Crew are left with a 1:0 win against Toronto and a dicey 3:2 win over Orlando City. Not nearly enough to put them above DC.

5. Toronto FC
The 3:0 loss to Philly was embarrassing but TFC otherwise put in solid effort. They took apart a Orlando team the the Crew and Philly struggled with and played KC as well as anyone during this tournament.

6. Orlando City SC
I would like to see Orlando's payroll. Not only are they trying to squeeze into the MLS soccer table, they are also amassing a lot of MLS level talent. Dennis Chin was the best attacking player of the tournament. They also have Long Tan, Luke Boden, Kevin Molino, Rob Valentino and Jamie Watson. All of them MLS quality.

7. Philadelphia Union
The only bright spot for them was the Toronto win. Other then that they looked very not good. When I saw them in person this past Saturday against DC they looked even worse.

8. Tampa Bay Rowdies
Frustrating February for this team. Only 1 goal (a PK) for and 11 against. Luke Mulholland was the bright spot for this team. From what I know about the NASL they will be okay but right now they are not.

Here are some of the better performers I saw during this 2013 preseason and Disney Classic tournament:

Tony Tchani
Only player to have straddled both the 1st and 2nd team and come out okay. Tchani looked smart and played consistently. On preseason performance alone looked better than Sanchez, Viana and O’Rourke.

Matt Lampson
Wasn’t scored on in 266 minutes of preseason play. What more can you as from a ‘keeper.

Danny O’Rourke
All Danny does is go out and contribute to wins while the club management team tries and shoehorn in something better. Other than injury, not sure what else he can do. When he played in the preseason: 1.91 GF, 0.48 GA.

Federico Higuain
He put in 414 preseason minutes. Third best behind only Tyson Wahl and Josh Williams (w/Speas & Hyland true HG). Federico buried 2 PKs and had 3 Assists. If it were not for him this preseason there wouldn’t be any first team goals to speak of. He is a special offensive player and from what I can tell during my time in Orlando, a good dude.

Others: Aaron Schoenfeld, Ethan Finlay, Konrad Warzycha and Justin Meram were the only players to have both a goal and assist (Federico Higuain had 2 PKs, 3 assists). 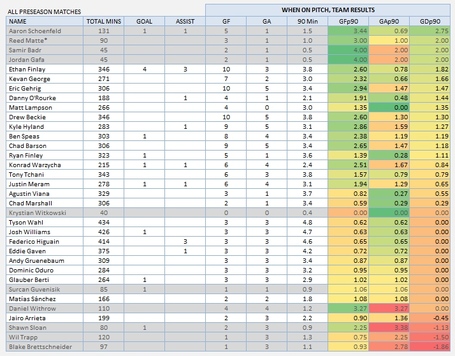 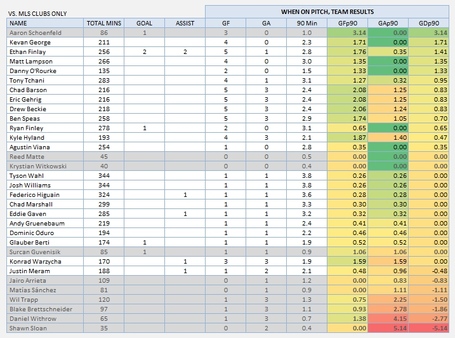 *More on Penalty Kick goals and the Columbus Crew over at Helltown Beer. A lot more.