Sanchez and Viana are Key Changes in Crew Formation

The two South American midfielders are expected to provide a strong defense while getting the ball into dangerous spots.

Share All sharing options for: Sanchez and Viana are Key Changes in Crew Formation

The roster has been turned over and the Crew will likely have five new opening day starters, but they will likely line up in the 4-2-3-1 that they used for the latter half of the season.

Early last year, the Crew lined up in a flat 4-4-2. The center of the field was crowded with two central midfielders and the wingers pinched in. The width was provided by overlapping fullbacks. The team played with two static strikers and results were dire.

The additions of Jairo Arrieta and Federico Higuain added some flair to the staid offense, but it also came with the shift to the popular 4-2-3-1. Arrieta was the solo forward with three interchanging attackers underneath lead by Higuain. Goals started raining down with the added firepower and new found tactical fluidity. It also came at the cost of a leaky defense. 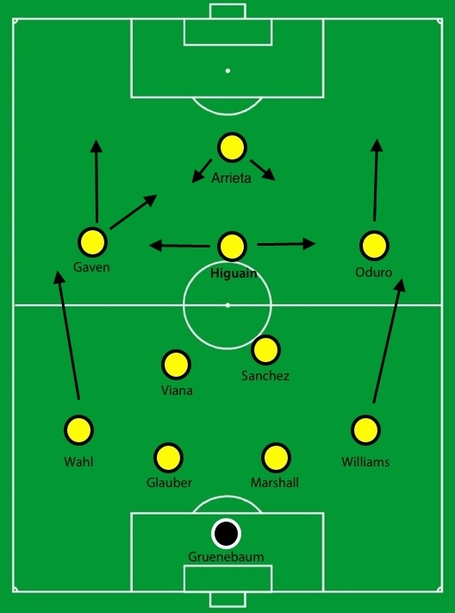 This year Robert Warzycha has decided to stick with the new formation but a personnel tweak. The attackers will still move and interchange, but the back line now has more help with a double pivot of defensive minded midfielders in Matias Sanchez and Agustin Viana.

Warzycha's 4-4-2 formation got it's width from the outside backs. The 4-2-3-1 is no different. Tyson Wahl and Josh Williams both press high and look to overlap with the wingers pushed in. Both Wahl and Williams are known to push forward agressively. Wahl especially will have room to work with as the naturally right footed Gaven cutting in centrally.

Warzycha often used Milovan Mirosevic with Danny O'Rourke or Chris Birchall last year in central midfield. Mirosevic was a much more attacking minded player than either Viana or Sanchez is and this left the midfield a little unbalanced as Mirosevic would push forward, often into the space Higuain occupied. 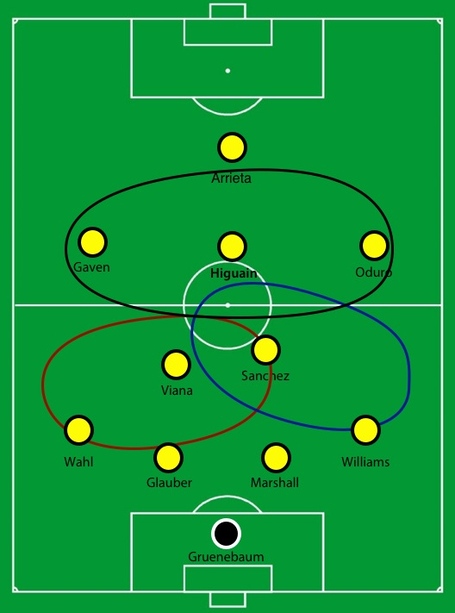 With Viana and Sanchez, Warzycha has two technical midfielders that can keep posession and maintain a screen in front of the defense. Both players ar comfortable on the ball and have linked up well with Higuain during preseason action. Viana (red) and Sanchez (blue) can cover the area underneath, covering sideline to sideline and allow the Higuain (black) to float throughout midfield or drift to either wing.

The formation changes without the ball. The Crew drop back into two banks of defenders with Arrieta staying high and Higuain dropping deep to pressure the ball and provide a counterattacking outlet. Essentially, the Crew becomes a very compact 4-4-1-1, looking to spring on the counter when getting the ball back.

The two banks can create issues trying to break pressure. Spacing between the lines can become compressed and defenders, not finding an outlet, will boot the ball out. This merely invites more pressure. Sanchez and Viana are expected to be able to hold the ball in traffic, waiting the extra second or two for Higuain, Gaven, and Oduro to become available.

The two new midfielders are the Crew's best chance to find balance between offense and defense. Higuain, Arrieta, and Gaven lit up the scoreboard in the second half of last season. The Crew staff are hoping that Viana and Sanchez can keep the opposing team from doing the same.