The countdown to the start of the MLS season is now measured in days, which means it’s prediction season. Most tend to start top down by ranking club finish on the table. Instead of doing it that way, here’s a rough draft look at the Crew from the ground up; Projected minutes then the Goals that may follow for the 2013 season.

"Goals win games" the old worn out saying goes. In order to get goals though, you have to have minutes. Since Robert Warzycha and Co. have been at the Crew helm since 2009 their behavior can be somewhat predictable. As such; below is a quick look at how many minutes each player might play this year along with the amount of goals they might score based on available data.

48 total Goals, if you’re keeping score. What this tells us is that the Crew are set up to be about the same as last year (44 goals) in terms of offensive production, only the plan this year is to have a better defense.

If you track back to the first half of last year you’ll see that the Crew had a very good defense but couldn’t really get any goals themselves. Club watchers will note that if you strip out the 2nd team’s goal production from the 2013 preseason results, the same thing seems to be poised to happen this year (1.10 GF, .90 GA).

New player signings; Matias Sanchez, Augustin Viana and Glauber Berti are all on the defensive side. All have been made in attempt to sure up a defense that needs to stand ground while Federico Higuain, Dominic Oduro, and Jairo Arrieta linger on the offensive side of the halfway line.

This is what the Crew are banking on this year if players stay healthy. The table position that comes from this is in the mid-like range for the Crew.

I’ll have a full Eastern Conference Ranking next week.

• Justin Meram, Dominic Oduro and Ben Speas will rotate around in the RMF spot but it’s really a lot of unnecessary work to mix them around. The position of Right Mid, itself, will yield 10 goals +/-2 for the Crew. Personally, I’d rather it be ‘owned’ by one or two players. Meram or Speas would probably do best here because Oduro isn’t a MF player. Oduro should be used exclusively as a back up to Arrieta or a 2nd forward late in games when behind.

• My goal estimate puts the Crew around 1.37 Goals per Game (1.29 last year). I’m still evaluating the defense. That means only half the picture is complete.

• Looking at last year’s table I think the Crew can finish as high as Chicago Fire, Real Salt Lake or the Houston Dynamo did in 2012.

• That said; I do believe that the Crew have increased risk this season, therefore the likelihood of finishing at or below 2012 position is high.

• People tend to find their highest level of incompetence. The Crew have been dropping in the overall table since 2009. There have not been any changes to management positions within the organization since then.

• I have 28 players on my list of 2013 players. March 1st is the date given to submit final rosters. 30 is max possible, final two slots can be used for allocation money. 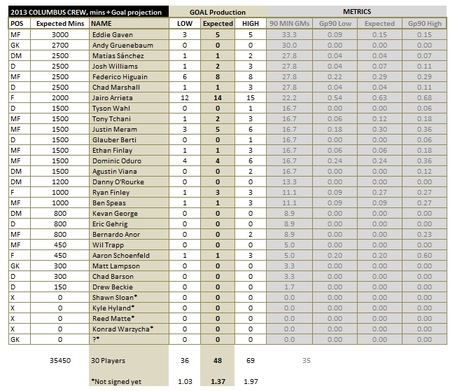