Here is a look at which Crew players have put the most pressure on the opponent's goal over the past three seasons.

While mulling over previous season stats in preparation for another post I thought it would be fun to look at which players have been the most dangerous in recent seasons.

The reason playing around with attacking related statistics is fun is because most are readily available and familiar.

Instead of using player totals each year I’ve converted commonly available stats into efficiency metrics. Once that was done I ranked each player by category and then averaged that figure out who was most dangerous.

Here are the categories I used to determine the most dangerous player:

Goals per 90 Minutes Played (Gp90)
Pretty straightforward but for this efficiency I eliminated Penalty Kick Goals. PKs can be very misleading. 5 of Andres Mendoza’s 13 in 2011 and 5 of Guillermo Barros Schelotto’s 9 in 2010 were PKs.

Shots per 90 (SHTp90)
Shot statistics can be extremely misleading because of the subjectivity involved in tracking them but they can be used as a general indicator of how dangerous a player is.

Shots On Goal per 90 (SOGp90)
Less subjective than plain shots but still misleading. In most leagues this is only balls that are on frame (have a chance to go in).

% Shots on Goal (%SOG)
Might be slightly redundant to use this along with the two categories above but I wanted something to further separate player quality. Example: A 2012 Emilio Renteria took a lot of shots, but few were on target.

% Goals per Shot (%GpSHT)
Same with this one. It’s a quality measurement I’m using to meter shot metrics. The higher this percentage the more certain the player’s dangerousness and quality.

Points Share (PtS)
Percentage of possible 90 Minute Games Played x the total amount of points the team, as a whole, won that season. This is used to push down the players that didn’t play much who might have otherwise been productive in a short amount of time. When messing with efficiency it’s important to have a governor that eliminates ‘luck’. Examples here would be 2010 Leandre Griffit, who in 43 minutes had a goal and 2 shots (both on target) and a 2010 Andres Mendoza (2 Goals, 1 assist, 4 shots 2 on target in 204 minutes).

Goal Importance (GI)
Last but not least. This is more of a bonus score for players. It’s a combination of % of overall goals that were on the road and % that were Game Winning. I wanted some sort of measurement that rewarded players that directly contributed to adding 2 pts to an otherwise drawn game and ones that can get those very difficult away goals. 5 of Steven Lenhart’s 6 goals were on the road in 2010 and also notched a game winner. Scoring late to win or nabbing one on the road is a very important type of forward to have. 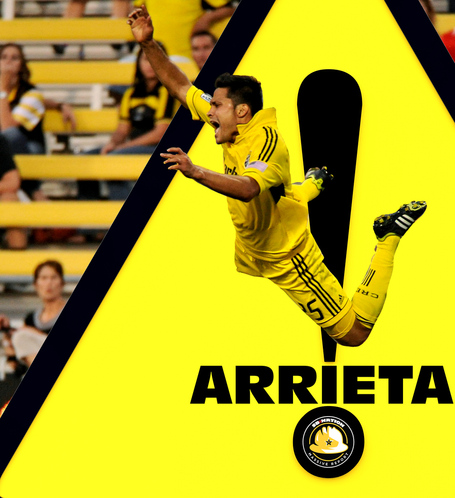 1 : 2012-Jairo Arrieta
Arrieta is an extremely effective attacking player. The only things that took his average down were PtS and %SOG. The first is because he came in halfway through the year and the second is something you see from strikers more than mids because they take more chances. Watch out. The 2013 future him might even be better.

2 : 2010-Emilio Renteria
Only played 857 minutes but was an unstoppable force in each one of them. 5 goals total with 4 of them being game winners. He also scored 2 of them on the road. 30 shots and 15 on target. Absolutely amazing attacking numbers.

3 : 2010-Guillermo Barros Schelotto
He is in the middle of my illustration because of the respect I have for him. 2010 was Schelotto’s last year with the team and in MLS. It’s pretty clear that he probably had another year at least in him. It’s also clear he would be topping this list were I have gone back to a couple more years.

4 : 2011-Andres Mendoza
And here he is. His/the team’s tumultuous 2011 season. He gets a great deal of criticism but this year of his was impressive. Now that there is a season between him and now it is easier to say that some of things he did seem slightly more impressive. He had a pretty amazing left foot and don’t forget he played half the year with a broken arm in a giant cast. Say what you will, he was a dominant figure on a team that was in first place in the East for a good spell.

5 : 2010-Steven Lenhart
I was a little surprised to see him up so high on the list but also consider the quality around him in 2010. Also consider that he is still playing at a high level in San Jose. He played a role that the Crew still haven’t filled. His 5 goals on the road still stands as best since 2010.

6 : 2011-Emilio Renteria
The 2011 version battled nagging injuries but played a much bigger role than they year previous. The injuries might have contributed to his accuracy dropping. He also didn’t pair up well with Mendoza. Still, 2011 Renteria was an efficient force of nature.

7 : 2012-Eddie Gaven
Eddie had a standout year last year. He has very few weaknesses even when evaluating attacking efficiency. His only weaker point was in assists in 2012. Had he had just a couple more he would have finished up top my list.

8 : 2012-Justin Meram
The definition of seizing an opportunity last year. 4 goals, 1 assist in 960 minutes. Much the same as 2010 Renteria. Two game winners, two on the road. In a league where ‘defending’ is categorized as running into the player with possession, Meram can work around that. He’s got a basketball point guard like savvy in that knows where the defender is going and able to use his body to shield the ball whilst advancing. When he’s on, it’s pretty magical. In 2012 he had that with 3 goals in 3 games.

10 : 2011-Eddie Gaven
What we all know about Gaven is playing out in the numbers here. He plays on a consistently high level. It’s remarkable, really. Only real difference between these two years was assists and point share (injured part of 2011).

11 : 2012-Federico Higuain
Splitting hairs between the 8th position and here. Higuain made a huge impact in his short time out there. The only things that kept him from an average higher rank were Point Share, his accuracy (SOG and GpSHT were low) as well as a surprising 0 goals on the road. All 5 were at home and 1 was a PK.

ROUNDING OUT THE TOP 20:

Other notables include; 2012 Olman Vargas at 36th who was outdone by 2010 William Hesmer (yes) at 29th. Anybody who plays with metrics knows there are always a player or two that break it. But hey, look at this: 1 shot, 1 goal, on the road and it was a game winner. Epic memory for Crew fans. Fair enough.

• If you want to see the full list you can go here.

• Why the past three years only? For one; Major League Soccer changes too much year to year (expansion and rules) to go back any further and expect to get much out of comparisons. And two; 2010 is the effective start of Robert Warzycha’s tenure as head coach. Which is to say: His methods, philosophy and players took to shape in 2010.

• Again, this is more of a fun way to measure and just one way to do it. It is not intended to be some sort of ‘be all, end all’. There are many more ways to measure player performance, this is just one. That said, it’s infinitely better than what you might hear out there. Hope you enjoyed this post, thanks for reading.