Despite not being able to pull the Crew out of the gutter in 2013, bottom half finish in 2014 and getting fired for inconsistent results in 2015, popping back up as the head man at Primera B Nacional side San Martin but then not have a win in my first 8 matches there... I love Football Manager.

Share All sharing options for: A Holiday FM14 Review

At it's core, Football Manager is a massive soccer database that plays out in front of you by way of millions of conditional if then else statements. One that some have called a playable spreadsheet (but isn't everything in life like that?). In a lot of ways it is just that but what's interesting to me is that each time you talk with someone about the game or read a write up on it -- you get a heartfelt story.

My experience with this year's version is the same. All the decisions I've made, the levers I've pulled, are not only tracked in a cold facts and figures rundown under my History Overview but also in vivid memories of decisions I made.

It's a very strange thing, this. The satisfaction that comes with recounting what your last go around with FM is a gaming feeling second to none. In fact, now that I'm writing this, it has been powerful enough to conjure up memories of Wayne Gretzky Hockey back in the late 1980's on my friend's Amiga. Both games similar in spirit (in fact, first developed around the same time).

For a person that follows the sport aggressively, this game can be a surreal experience. It's not the same as playing EA's FIFA franchise where the guts are mostly covered in a pretty gameplay skin. Here, there is no winning with your favorite player on an easy difficulty or scoring 8 goals in a game. With the FM series the mechanical innards of the sport are pushed to the front and unlike FIFA there are four walls and, well... rules.

There are 117 playable leagues in FM14 and to any regular fan of the game knows that MLS is probably the most joyless. All the byzantine rules are here. Salary caps, allocation money, the college draft, waivers, league taking over 60% of transfer fees... It's all here (and wonderfully done). 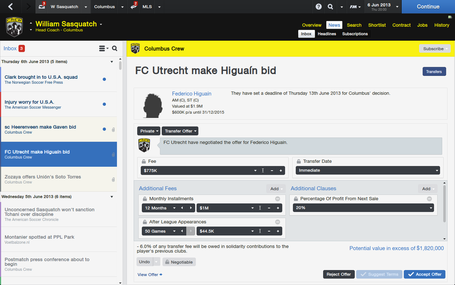 I'm on the verge of making a deal that sends Federico Higuain to a German side for almost two million dollars, the league will keep almost all of it and the my beloved Columbus Crew? We'll get a bit of 'allocation funds'.

There are many stories like the one above when you are playing with a MLS side but herein lies the beauty of this game. It's honest and unrelenting. The player's pay is accurate, values are accurate, player evaluations are accurate. It's incredible.

I mentioned my experience with this game up under the title. A pretty poor run with the Columbus Crew over the next three years, it was. But I have an excuse! I spent most of my time trying to find the walls in the game, testing to see what I could do. This is where the fun arrived.

Sell Glauber, Chad Marshall, Higuain, Gaven, build my allocation fund treasure chest, work in Tom Morrison's tactics (2-3-5) from the 1930's as described by him, constantly encourage Eric Gehrig to the point of it making him angry. You can do anything you want like this whilst playing in MLS as long as you fall into the leagues strict franchise rules.

The genius of the game is just that. The meticulous attention to detail. From the history of each club to the intimidating amount of player ratings to the structure of each league.

Wise man once said: "Thinking outside the box presupposes you could think inside of it." 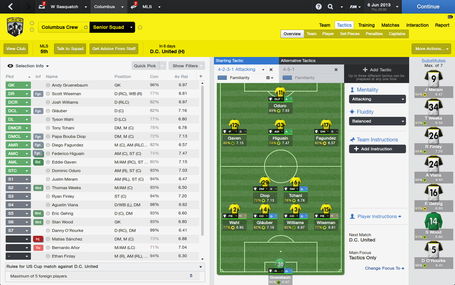 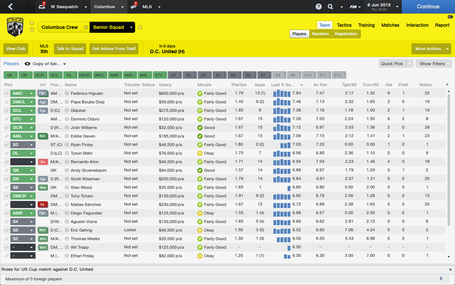 While playing as a MLS team highlights the genius of Football Manger playing as a team in any lower division across the world brings out the fun. Playing as a side you are unfamiliar with sharpens your FM senses and frees you from the burden of player's real life personas (although you may find yourself looking them up). In fact, the game allows you scrub real life names for made up ones (much respect to anyone doing that).

After playing 50+ hours of FM14 as the Crew for this review I'm starting to yearn for my time with the Killymoon Rangers of the Northern Irish Football League Championship in last years version.

There, in that league like almost all others, you have somewhere to go. Somewhere to advance too. For all the reasons I mentioned above, this is where fruits of labor and be realized and where the game really shines.

I've been a yearly fan of the FM series for about three years now and I'd never really spent real time playing as an MLS team till this year but what I've found in 2014 is that it is almost a tutorial on how the league works. For folks like me, who feel that following and writing about MLS requires an investment in time to keep up with regulations is just as pertinent as the play on the field, it's a gaming masterpiece.

For the other 99.9% of the folks that love the sport, it's an incredibly fun game that is made for the thinking gamer - and one that I can't recommend enough.

Now... time with family and friends is up and this review is done, time to check in on those Killymoon Rangers.

...right after I take care of some unfinished business in Argentina with San Martin. 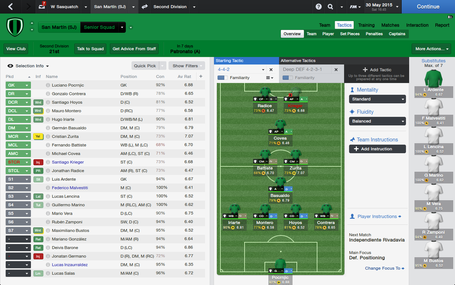