Kjell Hanssen maintains a beautiful record of Liverpool football history. Below is a piece he transcribed from the Inverness Courier newspaper published in 1929 that talks plainly about tactics. The author, Tom Morrison, was not only a Scottish International and well known Liverpool player but also incredibly interesting person.

Share All sharing options for: Half-backs and the Attack (1929)

Taking a break from the Columbus Crew over this Thanksgiving holiday to take a at how a young, somewhat eccentric, Scottish player viewed tactics in 1929.

Tom Morrison was born in Ayrshire, Scotland. After winning the Scottish Cup with St Mirren in 1926 he was signed by Liverpool where he stayed until 1935. From there he moved on to play for Sunderland, winning the League title in 1936.

That's the "wiki" version of him.

However, thanks to the book Villagers: 750 Years of Life in an English Village, by James Brown we are presented with a much more colorful and well rounded human being.

According to Villagers, Morrison didn't so much get moved as he vanished from Liverpool in 1935. After multiple suspensions his time on the first team began to dwindle and when he was scheduled to play for the reserve team he just didn't show up. Several players said they saw him on the golf course as a caddie.

Liverpool lost patience with is erratic behavior and moved him to Sunderland in 1936 where he contributed greatly to the Black Cats only domestic title.

Morrison would again disappear from a club. This time it was right after the celebration dinner of the title he had just won. "He left his medal, bonus, wife and child behind him."

The reason he pops into the book Villagers is because it is about the village of Gamlingay, a civil parish in South Cambridgeshire, England and it is here that Morrison shows up after leaving everything behind in Sunderland. Only now he went by the name of Jock Anderson, a pea picker (migrant worker) who liked snooker and playing evening football.

Word of his talent spread and he wound up playing the first nine games for the local Gamlingay club (winning them all) where he helped propel them go on to finish 3rd in the league (they lost 8 of 13 without him) in 1936/37.

Morrison would disappear yet again after this stint and little is known about him from then on.

From what I can gather Tom Morrison liked writing about the sport and penned a few articles for various newspapers in the late 1920's and early '30's.

Here is one that, thanks to Kjell Hanssen's work, is still alive. It's an absolutely fascinating look at tactics as they looked from a young active player's perspective in 1929.

HALF-BACKS AND THE ATTACK

T. Morrison is one of the "regulars" of the Liverpool team, having appeared in every League match last season – forty two in all. He came south from St. Mirren, after having represented Scotland against England. He is an exponent of the Scottish school of half-back play, and defenders as well as spectators know his "drawing" powers.

Many football problems have been settled by the events of the last season or two, but there is one to which nobody has yet found an answer. That is, should the half-backs play up behind the forwards, or should they assist the backs? It is easy to reply, "They should do both!" But the simple fact is that a footballer torn between the claims of two duties is not as effective a force as he might be. Undoubtedly a half-back is there to throw his weight into the balance – whether it is in defence or attack – bit he must have some guiding idea behind his game.

My own view is that a half-back must make himself responsible for making opening for the forwards. If he does not pull his weight in this, too much of it will fall on the inside forwards. And if the inside forwards spend too much time hanging back to draw the adversaries’ defence, you will have only one really effective unit in the front line – the centre-forward. This, of course, is a system on which some teams play. They have a crack sharp-shooter in the middle, and they are satisfied. But though I have nothing to say against this as a team plan, it is not an idea to appeal to every player, or every team.

At the present moment, many teams are turning to distribute in the other direction. They are aiming to distribute the scoring all along the front line. The "spearhead" line of attack straight down to the goal was very popular a season or two ago, but now we are flattening-out the spear-head, as it were, and giving it a cutting edge all along!

Even the "W" formation does not dominate the issue as it once did. The inside men still play slightly behind the centre-forward and the wing men, but they do not keep too far back if they can help it. That is why I think that the present tendency of half-backs to support the attack vigorously is a sound one. The centre-half, of course, has his own individual duties. I am speaking now more of the wing half-backs.

I have seen a half-back helping the backs to the point where he was actually in a position to head away a shot at goal. If a man is able to do this, he is quite right. The end has justified the means. But if a half-back comes forward, takes the ball as the goalkeeper attempts to clear it, and sends in a long shot that scores, I would say he is right too. The end has again justified the means.

In short, my idea is that attack should be the dominant idea in the mind of the half-back, but that a half-back should always be ready to cover the backs in emergency. The problem to solve is how this can be done without upsetting team combination. A half-back clearly cannot be pushing vigorously forward if he is thinking at the same time about covering the line to his own goal. The method that is adopted in most teams to overcome this difficulty is to have the half-back who is actually behind the ball up with the attackers, and the half-back who is temporarily out of the struggle farther back, and more nearly centred, ready to cover the backs – or the line to the goal if necessary.

It is a method that works out very well in practice. If your wing man and inside forward, or centre-forward and inside man, have the ball between them you can get up behind them and work some effective triangle combinations. No tactic is more successful than for the inside man to draw a defender, and then run over the ball, leaving it to you to pick it up and draw the defence still further. You can then pass the ball forward to a member of your triangle who has been left unmarked by the success of this manoeuvre, and so be ready to push the attack along further by means of a similar movement. Triangle combinations are effective football, as well as pretty to watch, and they can only be varied enough to deceive the defenders repeatedly if the half-back takes a hand in them. In front of the goal, too, the inside forwards will be closely marked. A half-back who knows the attacking game can place himself to make matters very difficult for the adversaries’ defence.

It is a truism about football that if you can get one more man behind the ball than the adversaries have, you must triumph in the end. The team play of the half-backs must be devoted to getting that extra man behind the ball. If the ball is swung over to the other wing, and a counter-attack develops, the other half-back, who has remained behind, is ready to help to make a "three back defence" instead of a two back defence. A team that has a "seven forward" attack and a "three back" defence must always be sound. The great secret of the movement is that the half-backs can move up and down on the wing as they are needed. They can introduce infinite variety in their game – but in doing this they must remember that they have a place of their own, which is between the front and the rear. They are connecting links, and should never break the connection. 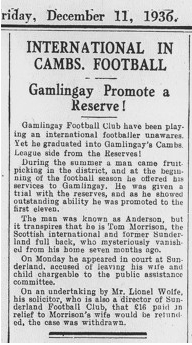 Thanks for taking a break from Columbus Crew news here at Massive Report today and taking the time to read a story unrelated to the team.

Any questions / feedback or correction please email me at ljbaby654@gmail.com.