West Coast Bias - Does MLS Need to Shift to the East?

MLS expansion is in full swing, as will soon be their new TV contract negotiations. In this article, I look into how the population base of MLS' franchises will shift between now and 2020, and how that might align with their potential audience.

Share All sharing options for: West Coast Bias - Does MLS Need to Shift to the East?

There's an old adage: Fish where the fish are.  You could have the best boat, tackle, beer cooler and lake, but if no fish are in the water you won't catch squat. (That said, I wonder if catching fish is really the point of fishing.)

Last week, I heard that Sacramento was pushing for an MLS team. My reaction was, "Man, don’t we have enough teams on the west coast already?"  With 6 out of 19 MLS teams in the Pacific Time Zone, nearly a third of the league is out west.  That didn’t seem to align with the general population, and got me thinking about how well the rest of MLS aligns with its target audience by time zone.  To the Interwebs I went.

As you can see, while 50% of the population is in the Eastern Time Zone, only 37% of MLS teams are.  At the same time, while only 16% of the population lives on the west coast, 32% of MLS' franchises are there.  The two franchises coming on board in 2015 will shift these figures east a little bit, but MLS will still be overly committed in Pacific time and under represented in Central and Eastern.

As another reference, I looked into the current mix of teams in four other pro sports leagues in the United States and Canada.  Executive Summary: No other league is as misaligned as Major League Soccer.

Don Garber has stated that MLS plans to reach 24 clubs by 2020.  With three teams left to allocate and a floundering Chivas USA franchise ripe for the picking, four new locations could be selected in the coming years.  If MLS wanted to best align with the population, they would add two teams in each the EST and CST.  If that was the case, MLS 2020 would look like this:

The full debate about which locations are most worthy of expansion is best saved for another time, but using population as a guide would be a good place to start.

What I do want to address here, however, is why I think using entire time zones even makes sense.

First, ever wonder what percentage of the US and Canadian population is living in an MLS market?  No?  Oh... well, humor me... (This crap keeps me up at night.)  70%?  55%?  Try 35%.  That means MLS is currently not a hometown market for 2/3 of the population of US and Canada.  For those towns, MLS' best bet is going to be die-hard soccer fans, MLS-market transfer citizens, spillover fan bases or its close cousin, minor-league affiliated fan bases.  In all cases, aligning your pro sports league's franchises closer to the general population will help to bring in fans even where you don't have teams.

Second, you might be thinking to yourself, "Self, I know that folks in Place A are inherently more soccer-rabid than folks in Place B.  This should affect MLS' decisions on expansion big-time.  Nate needs to wreckkanize."  To this I say, in the words of Lebowski, "Yeah, well, that's just, like, your opinion, man."  If you look at data from www.usyouthsoccer.org on youth registration by state, you'll see a different story.

On that site you can find the total number of registered youth soccer players by state.  Take the 2011-2012 info, divide this by each state's population and presto!; You have a figure that might be a reasonable gauge of MLS potential audience in the next 5-20 years.  Here's a heat map of that information for the United States and Canada: (Click on map for interactive state-by-state results.  Thanks to www.openheatmap.com for the tool.) 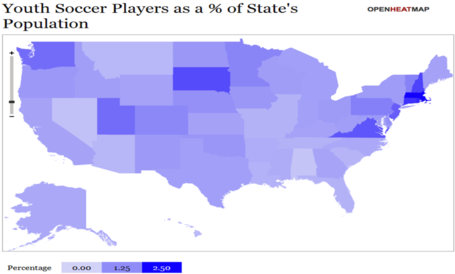 You can see a stronghold in the Northeast, where soccer in the United States has a rich history. There’s a dearth of players in the south, where American football is still king. But while there may be some light regionalization, there are states from all time zones in both the top and bottom 10. You can’t really say that a certain time zone is more soccer-driven than any other.

Finally, check out the population distribution of youth playing in the US and Canada:

What this says is that kids all over the US and Canada are playing soccer, and are doing so in a way that closely matches the overall population.

So, why's this a big deal?  A league that oversells itself in one part of the country is missing out on opportunities in another part.  This leads to under-performing in ticket sales, TV ratings and corporate support.  It would also result in higher miles traveled, which creates extra player fatigue and increased cost.

There are many other factors not discussed here that influence selecting the right locations for expansion. The right ownership, facilities, in-town competition for entertainment and natural rivalries with other teams are some of the more obvious ones.  But population has to be in the conversation; you can't fish without fish.  Unless, of course, you're not that interested in catching fish.