A Look at the Crew Budget

With a couple player changes and some heavy lifting complete in the front office, here is a look at where the Crew Budget sits and how it might shape the off season build.

Share All sharing options for: A Look at the Crew Budget

Hard to believe it was just about two weeks ago that the Crew finished up the 2013 season.

In that short time Brian Bliss dismissed Aaron Horton and Matias Sanchez, Eddie Gaven retired, Gregg Berhalter was brought in, Bliss (himself) was fired and Mark McCullers was pulled off player personnel decisions and put into a business role (whose duties must include professional pot-stirrer of social media).

While that is quite a bit of change, even for a league like MLS, it leaves most of the rest of the changes this off season to that of the roster.

First place to look is the mysterious team budget that is handed down from Major League Soccer offices. Last year the league set the budget (cap) number at $2.95 million. That figure worked out to be 5% higher than the 2012 number of 2.81 million, which was 5% higher than 2011's $2.67 million.

It is possible that MLS opens the purse strings a little more but let's go ahead and apply the 5% to 2014 and say that team budgets will be $3.10 Million.

Next question after that is how teams get to a budget number. The exact budget hit numbers of player contracts are likely not known but we don't need that necessarily to get what the Crew have in terms of space.

Why is that? Both Mark McCullers and Brian Bliss have stated that the Crew have no space. So, armed with that information we can start there.

Here is what that looks like through the years:

The big jump you see from 2010 to 2011 happened with all teams in the league because of the increased roster size. Since then it has been stable.

Next step from here is to apply some of the simple budget rules to the top line cap number. Namely; the Designated Player rule and only players 1-20 hitting the cap.

Here is what the Crew budget number looks like:

It seems the Crew like to keep Base consistently about 10% below league budget while Guaranteed number is slightly above . Each team seems to function with the same consistency they are just a little lower or higher each year. Crew play it very straight.

Eddie Gaven, Aaron Horton and Matias Sanchez have already left the team and all three hit the Crew budget number due to the fact they are in the top 1-20 in payroll on the team. Here is a quick and basic rundown of the new balance sheet.

*MLS raises salary for returning players usually accounts for +7 - 10% increase in overall budget. With a cap that only jumps 5% each year, well... challenging. This includes an estimate on DP hit increase.

While the estimated freed up space of 330k in Base and 500k in Guaranteed is a decent place for Gregg Berhalter to start, the loss of Gaven is much larger than his budget hit.

Every league has is style of play, pace, tendencies, etc and Eddie was a grizzled veteran of MLS. You see time and time again players like Sanchez who might play as well as Gaven in a soccer vacuum but in MLS couldn't really adapt quickly enough.

WHAT THIS SPACE MEANS

Losing three budget players likely means the team will be searching for two or three more of same quality instead of relying on lower paid players to out perform contracts. Looking outside the Crew that would mean players of a Brian Carroll, Gershon Koffie, Ned Grabavoy, Patrice Bernier quality... to name a few.

This kind of space opening up from the first three players dropped is sort of unusual. While it does seem to almost open enough space up for a DP level player it also comes with the risk of hurting overall starting quality of the game day 18 as most MLS top half teams carry 12-16 players in the + $90k range. Adding a DP would be like a three for one swap and drop the Crew down a higher level player.

It's a risk that some might say take however. 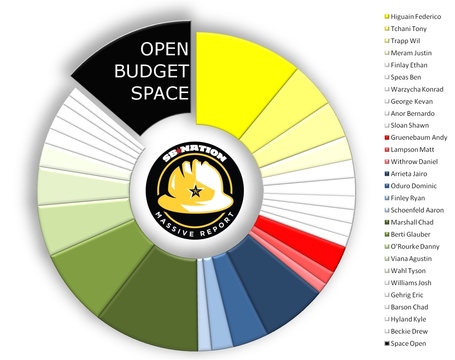 To any accountants out there: If this looks a lot like a ham-fisted Ops guy working his way through a simple budget --you are correct!

There are a lot of in and outs of MLS team roster builds that the league hands down (and rule bending as they do it). Trying to sort it all out sometimes feels like a fool's errand but I think looking at what franchises have done over the past half decade or so can tell us what is going on within a good degree of the truth.

Gregg Berhalter and the Crew have a little bit of space and we aren't even into December yet. Gaven leaving is a big blow but there is opportunity here. It'll just take some good old fashioned work. Not the bagels on Friday type, more like the three guys on the Crew badge type.

Bagel guys want to change it though. I guess we'll see how that plays out.