Each week, I update the Columbus Crew's playoff outlook based on their results and the those of their MLS Eastern Conference foes. This week the Crew fell at home to Sporting Kansas City. I, on the other hand, saw Nine Inch Nails in Cleveland... hence the spillover below.

After losing a fugly must-win home game on Saturday, the Crew now need such desperate feats as a tie from Toronto or potentially a win from DC United in order to qualify for the playoffs.  While they never Gave Up on Saturday, the effort wasn't as sharp as it was in the last three games.

Here's the view since June 30: 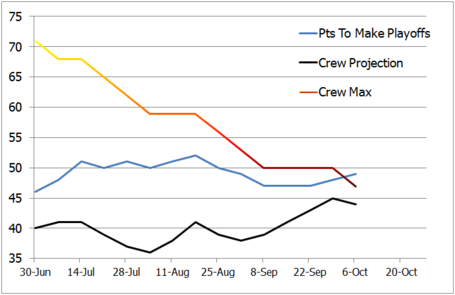 New York has clinched a playoff berth, and Kansas City is close behind them. Montreal, who led the East for the first 20 and 26 of the first 28 weeks of the season, is in full-on self destruct mode with one win in their last six and three more playoff-caliber teams coming up in October.  The standings, sorted by PPG:

Seattle was both frail and wretched against the Rapids this week.  With two rivalry games, an away trip to Dallas and a season-ending tilt against the Galaxy, nothing is guaranteed for the Sounders at this point.  I expect this race will go down to the final weekend, if not the final match, of the MLS season.  SKC is set up nicely, with the second highest maximum points and a game against DC remaining on their schedule.

This week, I'm adding an official WDIRF October calendar.  With so many matches to keep track of, this should sassifry all your team-rootin' needs in one handy .jpg.

There are four key games this week: