Makers, Takers and The Hunt for Goals

A closer look upstream at who created the opportunities (Key Passes) and those who put them on frame (Shots on Goal) might tell us a lot about why the 2013 Crew struggled with goal making.

Share All sharing options for: Makers, Takers and The Hunt for Goals

The 2013 version of the Columbus Crew were very inefficient finishers. In fact it took them nearly 13 shots to score a single goal from non penalty situations. Only San Jose and DC required more.

This forced the Crew to rely heavily on set pieces and penalty shots (the Crew have taken the most penalties in MLS with nine). What this works out to be is that a meager half of the Crew goals came from open play this year. FC Dallas is the one franchise that even comes close to that level of non-fluidity in goal scoring ability.

It didn't take a lot of digging to figure out that the Crew were missing some sort of target man, advanced forward, poacher or pure goal scorer (if there is such a thing in MLS besides Marco Di Vaio).

Some might say that Dom Oduro is a pure goal scorer, and maybe he is in the right situation, but the Crew used him in the middle of the field about half the time. Same goes for Jairo Arrieta this year.

KEY PASSES AND SHOTS ON GOAL

The answer to the Crew's open play scoring challenges can be found if you take one step back in the process to how goals are created.

One of the stats available to us now though the power of Opta is "Key Passes". This is basically a shot assist. What this tells us is who is getting the ball to a player in position to take a shot. Simple enough.

With Key Passes (KP) and Shots on Goal (SOG) as my chance creation guide, I decided to put them on a simple chart. On the far right you see a couple filters to play with. The more "90 minute" games the better (five is a good minimum).

I've started the chart off by not including Federico Higuain. He is driving everything out of control, which highlights the fact that this year's Crew aren't built quite right to match his skill set and exceptional skill level. You can still add him by clicking on his box to see what I mean though.

Sectioning out the chart above based on KP and SOG per 90 minutes played looks like this: 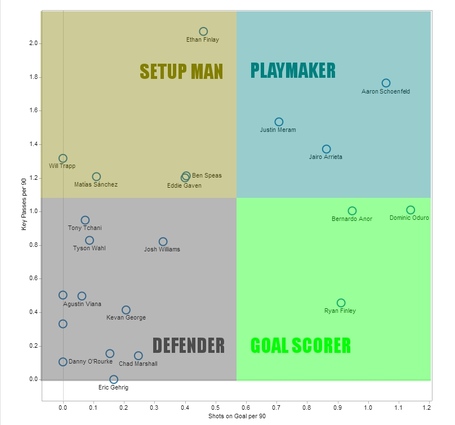 When playing around with it with the above in mind you can see that the Crew are weak in the setup / goal scorer skill set in terms of roles and responsibilities.

What I think this shows is the primary focus of the Crew this year; Defense. I'm convinced that this is mostly Robert Warzycha's doing but it also falls in the laps of Brian Bliss and Mark McCullers.

This makes sense if you consider the backgrounds of Warzycha and Bliss.

Jairo Arrieta and Bernardo Anor should probably be showing up in each other's spot. Justin Meram, a natural forward, is popping up in a playmaker spot when he should be down in the goal scoring section. Even a well known MLS commodity like Dominc Oduro is drifting into unfamiliar territory (Aaron Schoenfeld as a playmaker is likely due to lack of minutes... maybe? Highlighting the point).

What this points towards is that once you get past defenders the Columbus Crew trip themselves up a little bit in figuring out what players should be playing where.

Is this due to tactics? Roster build? Coaching? A combination of all three? Hard to tell.

One thing is for sure though, the Crew had a hard time getting creative in goal scoring this year outside of the brilliance of Higuain and the speed of Oduro. Both things of which most teams figured out and why the Crew are finishing up the season 16th out of 19.

Perhaps this off season we'll see some more thought put into where goals come from.