Each week, I update the Columbus Crew's playoff outlook based on their results and the those of their MLS Eastern Conference foes. This week the Crew took five and hopefully rested up for two straight victories against New England.

Current Playoff Outlook: Down To The Wire

With two weeks remaining in the season, The Crew can still potentially make the playoffs. It will require two wins over New England, as well as favorable outcomes in 5-6 other matches, but it can happen.

First, a quick recap of this week's results.

I've cut out all "projected" numbers this week. With only two weeks to go in the season, the numbers are small enough for us to use our brains and deal with them. Plus, after Montreal plays their Wednesday night game, all teams in the East will have played the same amount of games! Can you believe it?!

Tiebreakers reminder - after points, it goes: 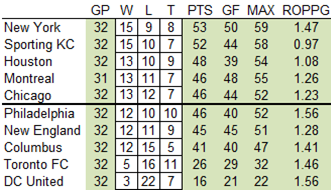 ...and the standings again, this time including potential points (gray).

Who Should I Root For This Week?

First, apologies for poopin' up your rootin' last Saturday. I had advocated for a Montreal win in their game against New England, which was wrong. While unthinkable just a month ago, Montreal is crashing so hard they could now miss the playoffs. I didn't explain those possibilities; for shame. The Revs winning was of no harm to the Crew, who would still pass them in the standings with two straight wins to close out the season. Clearly, you didn't listen to my jibba jabba, as you rightly willed the Revs to a win and a Lee Nguyen a 1-match ban to boot. I hope you didn't also will a horrific injury on Saer Sene; speedy recovery wishes to him from Massive Report.

With Houston now out of the Crew's reach, Montreal, Chicago and Philly are the teams on which you need to focus your bad voodoo. The Crew need to pass or catch at least 2 of these 3 in order to qualify.

As explained in the previous table, if 2 of these 3 teams gains 2 more points, the Crew are out. Lots of ways that could happen... you're smart enough to look at the schedule and sort that out. But there is one scenario that's especially interesting to me right now.

For all plausible playoff scenarios, the Crew end the season with 47 points. With Montreal and Philly playing each other on 10/19, one of those two teams will have to gain points. But if the Impact lose in LA midweek, and then that IMFC-PU match ends in a tie, both the Union and Impact will be at 47 points. Imagine then that Duncan rallies TFC into playing the game of their non-playoffed lives, and Toronto ties (a win would be asking too much, no?) the Fire later Saturday night following the Crew's victory at New England. The standings would be:

This would set up a wild grand finale to 2013's regular season. On Saturday, 10/26, Sporting KC will go to Philly on a few days' rest due to mid-week CCL. That match kicks off at 3pm; Montreal's tussle in Toronto starts an hour later. If either Philly or Montreal lose their match that day, the Crew would still be alive going into their Sunday home match against the Revolution. A Columbus win coupled with a Chicago loss would send the Crew to the playoffs. If both Montreal and Philly lost their 10/26 games, the Crew could clinch a playoff spot with a home win against the Revolution. This ability to clinch is because they would win the tiebreaker against Montreal, Chicago or Philly due to having 14 wins. So in a scenario in which all 4 teams ended up with 47 points, the Crew would actually take 4th place in the East and host the Wild Card game on my birthday, Halloween. Tony Sanneh, you are not invited.

The trickiest remaining game in terms of scoreboard-watching is next week's Impact-Union match-up.

Here's a cheering guide for the last two weeks of the season:

I moved this to the bottom this week because I wanted to focus on the Crew stuff.

**Editor's Note: Just updated this post-Seattle/Portland. Seattle played like a bunch of well-paid guys on the same team. Portland is a team.