Can Federico Higuain do for the Columbus Crew what Guillermo Barros Schelotto did?

They were born a scant 32 miles apart and stand within one centimeter of each other in height. They both play (or, in the case of Schelotto, played) the same position of Forward/Attacking Midfielder. In his first season with the Crew, Schelotto had 5 goals and 11 assists in 22 appearances. Higuain, while playing in fewer games his first season in the Black and Gold, notched 5 goals and 7 assists in 13 appearances. And yes, they both hail from Argentina.

Both Guillermo Barros Schelotto and Federico Fernando Higuain bring to Columbus poise, sportsmanship and a burning desire to win. They lead by example and are two men that their teammates try to emulate.

While Schelotto didn't win MLS Player of the Week in his first year (he was named to the MLS Best XI in 2007), by his second season with the Crew he amassed that honor four times. Contrast that with Higuain, who earned the MLS Player of the Week honors twice in two consecutive weeks and was named MLS Newcomer of the Year (2012). The similarities between these two men is striking. GBS was a supporter favorite and Higuain is well on his way to being afforded the same respect from fans.

In short, these two players are "game changers" when they don the canary yellow of the Columbus Crew. Their vision on the pitch is a sight to behold. Schelotto went on to earn MLS MVP, MLS Best XI and MLS Cup MVP in 2008, his second season with the club. What lies in store for Higuain as the 2013 season unfolds? Could he be "The One" to lead the Black and Gold back to the promised land of the MLS Cup? Will he wrack up the honors in his second season, as did Schelotto? 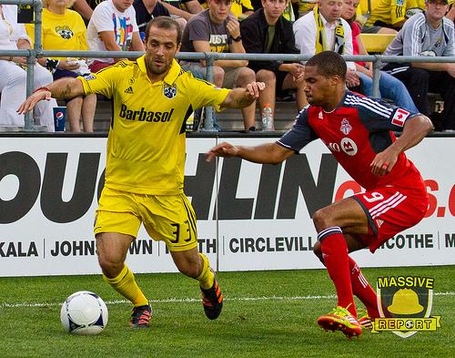 These are vibrant times, with the hope of a season yet to begin. Can the Crew put the right pieces in place to support Higuain? They've made some moves, but the thinking here is, is that they are not yet finished assembling the pieces. As I put on my prognosticator hat, I envision Higuain having a "breakout" season that is on par with that of Schelotto's second season. Federico knows what came before and he knows that the shoes he must fill are large. For a diminutive man, he's just the right size.