March 10th, 2012. Round 1 of the 2012 Crew season. 6:12 PM EST. Twelve minutes into the first game of the year Dilly Duka goes down with an injury. At 9:12 PM EST September 19th of the same year, injury free and lifetime later, he is subbed out and heads to the locker room.

Share All sharing options for: DUKA, A PEOPLE'S HISTORY - March 10TH 2012 to Present

ROUND 10 : MAY 19
Duka came on for goal scorer Justin Meram in the 60th minute. Crew almost pulled out a win but Alan Gordon equalized in the final minute to pull San Jose even. A draw at San Jose in a late time slot is a good result though.

ROUND 11 : MAY 23
Duka’s first start of the year after the week one injury. The Crew go on to win 2-0 at Seattle. Duka is on the pitch for the 1st goal but is subbed off in the 57th minute for Tony Tchani. He picks up an assist and a yellow. Many say this is the win of the year.

Important to note here that after Round 12 is the embarrassing loss to the Dayton Dutch Lions in the US Open Cup. Duka was in the 18 for that game but did not play. 10 of the 18 players that suited up for that match are not with the team in Florida right now.

ROUND 16 : JUL 8
With the game tied, Duka comes on in the 82nd minute for Emilio Renteria. Montreal scores late and wins the game 2-1.

ROUND 17 : JUL 14
Down 0-1, Duka enters the game from the bench for recent signing Jairo Arrieta. The Crew end up losing 0-2 to Sporting KC. What this amounts to is a frustrating way to return from a long layoff.

----------
THE HALFWAY POINT
With the first half the season over Dilly Duka has only seen 3 Starts and come off the bench 3 times for a total of 234 minutes which equates to only 15% of possible minutes. His team metrics as a starter were good though. The club was +1 on Goal Difference through the first 17 while he was +3 as an individual when starting.

Overall, it was an unassuming injury nagged first half of the the year for Dilly. That said; Things were about to drastically change.

ROUND 18 : JUL 21
Duka starts in a big 1-0 win against a good DC United team. Dilly was on the pitch for the goal but again is subbed. This time at minute 74 for Ethan Finlay.

ROUND 19 : JUL 28
Another start, another huge win for Duka. 2-1 over Sporting Kansas City. Duka still subbed off though. 84th Minute for Tony Tchani.

ROUND 20 : AUG 4
Duka’s 3rd start in a row goes down as a loss to DC United. It was a hard fought match. Duka again stubbed at the 84th. Finlay comes in.

ROUND 21 : AUG 15
LA Galaxy are in town looking for 3 pts. Duka gets another start in the 1-1 draw. Positive result against a LA team in need of wins. Duka subbed again, 74th minute (Meram).

ROUND 22 : AUG 19
Huge game against Houston in their new stadium where they are unbeaten. Columbus is up 2-1 when Duka is yet again subbed off for Finlay at 75’. He had an assist and a yellow before being taken off. Adam Moffat hammers a long range blast, late, after Duka goes off. Crew let crucial Win slip through their fingers.

----------
OUT OF CONTROL
After a rocky start, the Crew found themselves still in the playoff hunt. Dilly Duka’s metrics as a starter are off the charts and he has a couple assists in just over 600 minutes. To this point the team is only earning 1.36 Points per Game (PPG) but Dilly’s 8 starts has seen the club grab 2.13 PPG. Duka is also at +5 goals as a starter while the Crew are -1. Considering that the club had only 23 goals to this point, Duka’s +6 on the team average is astonishing.

Federico Higuain enters the picture at week 22 in Houston. He was used as a sub in the draw and from this point on the Crew are different. Gone are defensively focused games and Andy Gruenebaum’s shutouts.

From this point on, the Crew transform radically... 1.05 Goals per Game and 1.09 against turns into an outrageous 1.75 Goals For and 1.67 Goals Against. Gruenebaum, who had 7 shutouts in the first 22, only turns in one (against Chivas) after Higuain’s first appearance..

ROUND 23 : AUG 22
Does not play (pretty tight stretch of games for the Crew upcoming)

ROUND 24 : AUG 25
The only full 90 minute game for Dilly is a rollercoaster ride against the New England Revs. The Crew win 4-3 in the most exciting game of the year.

ROUND 26 : SEP 1
Duka starts in a game that was knotted at zero for most of it. After he is subbed off in the 63th minute it gets a little wild. 3 goals are scored. It ended up being a 2-1, Crew.

ROUND 27 : SEP 5
The Crew’s batshit three game stretch of beating bottom feeding Eastern Conference clubs comes to a sobering halt against a poor New England team. Duka starts but yet again is subbed. This time it was Renteria at the 75th minute. The team was 0-1 when Duka left. They ended up losing 0-2.

ROUND 28 : SEP 15
Crew face an in form NY Red Bulls. Duka gets the call to start and performs well. At 1-1 and in the 65th minute, he is taken off. NY ends up taking this one 3-1 after Gruenebaum slams head first into the goalpost trying to stop one and his sub Lampson misjudges a corner that allows Thierry Henry to celebrate a rare 'Olimpico'.

ROUND 29 : SEPTEMBER 19, 2012
Even though it was a win, this game was the breaking point for Dilly Duka and in a lot of ways, the Crew. With the game stuck in the mud at 0-0 Robert Warzycha points over to Emilio Renteria and in the 57th minute -- Dilly Duka comes off. 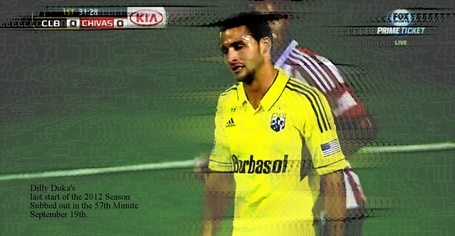 Where it gets wild is when Duka is not on the pitch: The team went 1.50 GF per game and a 1.33 GA during the same timeframe.

Another way to put it is: Even though Duka played 77% of the minutes between week 18 and 29, the 23% without him was enough for a wild ride. With Duka it works out to be 2.37 goals per 90 minutes (both sides) when he was on the pitch and 4.41 goals per 90 when his wasn’t. That’s nearly double the goals without him.

If you remember, during this string of games the Crew were winning by way of late game dramatics and wildly inconsistent. Tactics or not, it’s interesting that that inconsistency was during the 23% of the time without Duka on the pitch.
----------

On 9:12 PM EST on September 19th of the same year, injury free and a lifetime later, Dilly Duka is subbed out. Fans and bloggers will note that he bypasses the bench and heads towards the locker room. Later in the evening the local press note that he isn't available for the post game interviews and the team reports that shortly after the game he took a flight to home town in New Jersey for “personal reasons”.

Dilly Duka only made two appearances in five games after Round 29, both as a sub for a total of 34 minutes. Six minutes in Round 32 draw against Sporting KC and 26 minutes during loss to DC United the next week.

The DC game ended the club’s playoff hopes. It was tied 2-2 when Duka came on for Justin Meram. A reversal of roles for the two players. The four goals without him on the pitch was the same rate as it was after he was subbed off all those times... that wildness playing out true to form during such an important game had to have been frustrating to watch.

The rate that followed Duka when he was on was true to form as well. Unfortunately, the 26 minutes saw the critical go for the other guys.

Lewis Neal scores in extra time. RFK erupts like a dinosaur rolling over one last time before passing and all the fans are soaked in a downpour of celebratory beer.

The Crew miss the playoffs for the first time since 2007.

Duka dresses but does not play in what many called a meaningless last game against against TFC at Crew stadium. Meaningless to some, perhaps.

On January 11, 2013 both Adam Jardy (Columbus Dispatch) and Patrick Guldan (Managing Editor of this site) report that Duka is up for trade.

During the 2013 MLS SuperDraft on January 17th there are multiple reports of Crew Technical Director meeting with the Chicago Fire in attempt to deal Duka to the Chicago Fire. This comes despite Ives Galarcep saying the trade is dead a day before on January 16th.

More from Ives twitter feed on Jan. 16: “Duka deal to Chicago died due to Duka's BIG salary number in 2014. Will make it tough to deal him. Crew will have to eat some salary.”

Ives, Jan. 17th, Draft Day: “Columbus Crew still trying to shop Dilly Duka. Not sure what went down in C-bus but it definitely sounds like Duka has worn out his welcome.”

Jan. 20th, Mark McCullers in an interview on TheCrew.com, “Sometimes players don't fit in with the club culture. I think from Dilly's perspective, he wasn't comfortable here. Sometimes, it's hard to get in a groove or hard to fit in when you're on and off the field like he's been.”

On the same day and same team website, this time Crew Technical Director Brian Bliss: "At this point, we've asked Dilly to stay out of training for the potential risk of injury and accommodating the possible trade. He's part of an ongoing discussion and hopefully within the next few days we'll be able to close that up."

Head Coach Robert Warzycha adds: "I think Dilly is a good player, but sometimes a player doesn't find a home… That's why they try to find something different and hopefully, things work out for Dilly."

January 21st, The Columbus Dispatch’s Adam Jardy quotes Bliss again, “If we don’t find the right deal, Dilly’s going to have to resign himself to the fact that he’s going to have to come in and play like he did at the beginning of last year and put the end of 2012 behind him and come in and conduct himself like a pro.”

Adam Jardy, a day later on Jan. 22nd: Robert Warzycha today on Dilly Duka trade: "I’m hoping before the end of the week that we’re going to have it done." Warzycha continues; “It is what it is, he’s a talented player but obviously having only two assists all season, that says everything about it.”

On Twitter: Ives Galarcep continues the conversation through a series of tweets (Jan. 22nd): Crew were ready to led Dilly Duka just stay home w/o a team so if they wind up making a deal that would be a big step for them. Chicago Fire were very interested in Duka, but his contract (& 2014 salary #) scared them off. Wonder if Crew willing to eat some salary now. Not sure what went down between Duka and Crew front office was but to say Crew can't wait to be rid of Duka is an understatement. Remember thinking Dilly Duka was one of the best players in U.S. Under-23 camp in Sarasota in December of 2011. Change of scenery could help.

I keep waiting to hear anything on Duka. I started this post sometime around the 23rd of January when the Crew said a deal would be done in the coming days. I figured that I'd keep writing till he had been been moved or the decision made to pull him back into the team.

That said, as of this writing, Dilly Duka is still under contract with the Crew for at least the remainder of 2013. He is not training with the club in Florida nor are there any new trade offers on the table for him.

At least none that are available to the public.