Tracking Performance: Returning Players vs Not

Share All sharing options for: Tracking Performance: Returning Players vs Not

The Columbus Crew are returning 17 players that started at least one game last year and are not returning 10. That seems like a lot to move but it’s not uncommon for a Major League Soccer team to have an offseason with that type over turnover. However, with most MLS clubs it doesn’t happen year over year (over year) as it does here in Columbus.

The Crew seem to be stuck in a perpetual rebuild mode. Shedding heavy contracts, dropping unused Reserve Team players, having re-structured deals rejected or just plainly (and bizarrely) not being able to find the player - have all become the norm for this club. Some reasons seem legit and others are head scratchers. But for all these reasons, it’s not often we hear or read about actual player results being the main contributor to release. It’s almost like a player’s on field performance gets completely lost in (google) translation.

One simple way to measure a player’s contribution to the team is to look at how well things went when they started. Did the team win that day? Does the team seemingly always win when your favorite player is in the starting XI? How many goals were scored when they were on the pitch? Does he only play well against bad teams?

Below will be a comparison of results between players returning for the 2013 season and those not coming back when starting against the top half and bottom half of the final 2012 MLS table.

As a group, the players not returning won more games when they started against more difficult competition.

This shows that the Returning Players did the job at beating clubs they should have at a better rate than those players released.

The reason results against teams in the top and bottom half of the table have been teased out is because the club finished smack in the middle of it for the second year in a row. The reason the Crew were mid-table in 2012 was simply that they couldn’t beat quality teams on a regular basis (seems like common sense but, as many know, sense is too rarely that).

The difference between the team’s results against the top (1.18 PpGM) and the bottom (1.88 PpGM) is drastic. To figure out what is driving those numbers up for players not returning and down for ones still on the roster you have to look at individual players (a Deep Dive, as they say).

The number on the right is total games started against top half (minimum 5 games needed). Of important note; This is all of Grossman’s starts. He never faced a team that finished in the bottom half. Other players to finish above the team average of 1.18 were Sebastian Miranda, Emilio Renteria, Josh Williams, Chris Birchall and Justin Meram.

Tony Tchani, Danny O’Rourke also finished slightly under the team average with 1.14 PpGM. Eddie Gaven and Andy Gruenebaum (both with 17 starts against top half) drove team results with 1.18 PpGM.

More on Mirosevic: He started 9 games against the top half of the table and finished with 0 wins, 4 draws, 5 losses. Comparing Mirosevic and Grossman’s results vs. top half, Grossman: 5 games, 11 pts earned - Mirosevic: 9 games, 4 pts earned. It’s shocking. 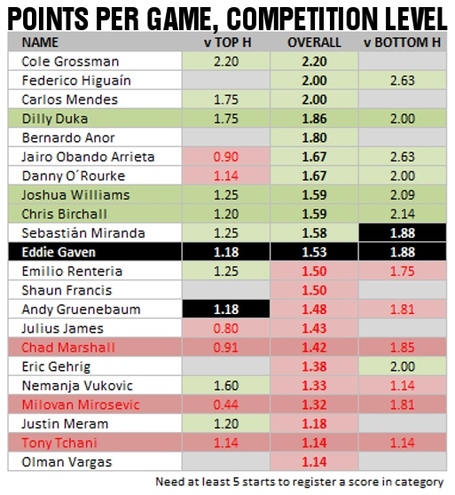 - This is just one way to measure performance. It is not perfect, no one metric is, and doesn’t account for changing results after a player has been subbed out. However, it can be argued that regardless of the final outcome, the game’s pace, flow and tactics are dictated by the starting 11.

- Only two of the nine players with better than average club results are confirmed as returning (Williams and Meram. Duka is on trading block)... seven of the eight performing below average are back and mostly starters.

- Something I should mention is the absence of Federico Higuain. He did not face the minimum of five games used in this exercise. He did face three teams in the top half: 0 Win, 2 Loss, 1 Draw with an on field Goal Diff of -0.67. Not a pretty line which is concerning but not enough to be actionable. His record vs the bottom half of the table was a stellar 7 wins, 1 loss.

- I’m drawn to metrics because of my background in another performance based business; manufacturing. In that world everything is measured and tracked day to day, minute to minute. Productivity metrics like Cost Per Unit and Units Per Person are poured over like sacred religious text and every out of control point in them is treated as if our very nation’s security were at risk.

- I think that performance in sports can be measured in a similar way and used as tools to improve. I will be tracking this metric throughout the year.

One way I verify that it works as a potent metric is to cross reference it with Goal Differential when a player is on the pitch. I abbreviated lists due (in part) to how long the post would have been. If you want a full list of GD and PpGM by player can go over to my blog Helltown Beer. I will also post Goal Differences of when a player is used as a sub. Sub’s can play a critical role, but should be treated separately. To round out the 39 players in my opening statement, I will include PpGM results from 2011 at Helltown as well.